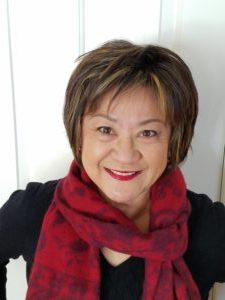 Suzette summed up in 110 words:

SUZETTE MARTINEZ STANDRING writes a spirituality column for The Patriot Ledger (MA), since 2007.  She's been a columnist for 21 years (1999-2021) and nationally syndicated for 13 years. Her award winning books, The Art of Opinion Writing (2014) and The Art of Column Writing (2008) are used in journalism courses such as Johns Hopkins University and are published in China. Suzette is a past president of The National Society of Newspaper Columnists. Since 2010, she is the host and producer of It’s All Write With Suzette, a cable TV show about writing. Email suzmar@comcast.net

But if you want to linger longer…

SUZETTE MARTINEZ STANDRING was born and raised in San Francisco. In 1996 she relocated to the East Coast - Connecticut, New Jersey, and now in Massachusetts - and her writing life began. 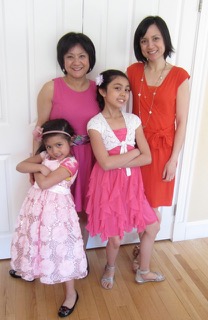 Suzette with daughter Star, and granddaughters Lulu and Bella in 2010.

Serendipity! An adult-ed course in journalism led to a reporter’s job at The Hunterdon County Democrat (NJ) where she was assigned to cover the County Board. (What? No. The county fair, maybe!)

Baptism by fire in the newsroom: write tight, be accurate, interview the unwilling, and write compelling copy under deadline. As an antidote to news, she penned a humor column that proved popular.

She moved to Massachusetts in 2000 where columns were published both locally and nationally in the column genres of humor, lifestyle, opinion, shopping, and spirituality/religion.

Early in her column writing career, she applied what she learned from award winning columnists she met through The National Society of Newspaper Columnists (www.columnists.com) She served on the NSNC board, and later, as president (2004-2006).

She authored The Art of Column Writing (2008) and The Art of Opinion Writing (2014). Both award winning guidebooks are used in national journalism courses, such as Johns Hopkins University. (Not bad for a gal who never went to college. )

In 2017-2021, she served as Executive Director for the National Society of Newspaper Columnists after years of being a volunteer board member and officer.  Organizational management hearkens back to directing The Association of Defense Counsel of Northern California, a legal organization of 1,500 attorneys in her former life in San Francisco.

Suzette has a talent and passion for teaching. The mechanics of writing are easy to learn or to fix, but you have to be born with the heart of a writer.  Suzette excels in helping others overcome insecurity, fear, uncertainty, and writer's block.  She especially loves the terrified and the insecure. 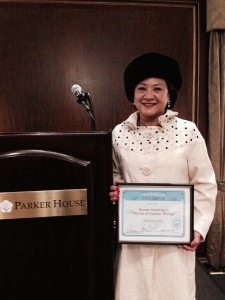 Suzette with First Place in the New England Book Festival, 1/2015 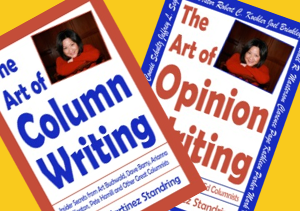 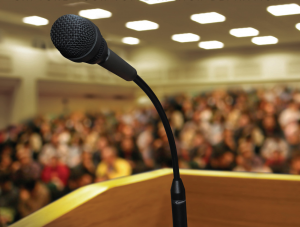 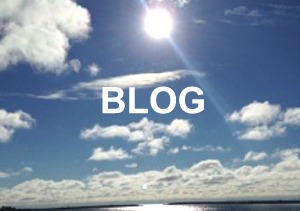