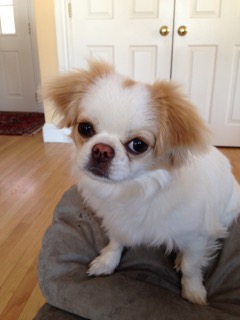 Pets have the power to render humans, well, more human. While dog walking and meeting others, I sense goodness on both ends of the leash. All my defenses go down, and that, my friend, is spiritual.

After my 17-year-old dog Mojo died in July, I couldn’t handle a new dog right away. Yet little Ginger pranced unplanned into my life. At barely six pounds, she was part of a neighbor’s “accidental litter.” As in all things, I bow to God’s timing.

Every dog I own gets smaller. Maybe I’m no longer strong enough to handle a big dog or the poundage of daily waste (Note: I do pick up after my dog and you should, too!) Years ago I started with a wolf hybrid, then it was a Gordon setter, later a beagle/spaniel mix, and now I can barely see Ginger, a Japanese Chin/Maltese mix, with every footfall. In every stage of life, there are challenges and ordeals, and at every turn my pet was a lifesaver. No doubt little Ginger has a purpose. Thank you, God.

In a world of strangers and isolation, pets do make it easy to meet each other. For instance, when a craggy-faced man approached, the lines around his mouth were etched in gloomy parentheses. When our eyes met, I smiled. Nothing. Yet when he spotted my mini-dog, he knelt down, “How’s da widdle, itsy-bitsy puppy-poo?” His leave-me-alone armor dropped with a clang.

Frankly, I can’t walk five yards without talking to someone. Studies show that pet owners live longer because of the mutual love and need between animal and owner. Pets can draw new friends into one’s orbit, which is bonus love and attention. Then there are physical benefits. If Ginger didn’t hound me for two or three daily walks, I’d otherwise be on the couch munching potato chips.

Even when four-leggeds are absent, their ability to create camaraderie extends across time and distance. At business dinners, for example, strangers size each other up, casting about for commonality. What is the lifeline conversation when floundering in the sea of acquaintance? Politics? Job descriptions? Once someone shared a surprising rescue to an evening’s glacial impasse: dogs.

No, I don’t mean a St. Bernard bounded up with a keg. Somebody mentioned her dog, and then the pet stories fizzed with a pop! There was no corking the flow from then on. Someone should invent a drink called the “bow-wow icebreaker.”

Dogs meet, sniff, and signal to each other, “I’m OK, are you OK?” By extension, we do, too. At the park, a couple strolled along with a Labrador, which playfully romped with my own “little gal in a dog suit.” I chatted with the couple in the fall sunshine. In the end we exchanged names.

“Ginger, because she’s snappy,” I replied.

I never did get the owners’ names, nor they mine, but I bet we easily could have shared a meal. They just didn’t feel like strangers.