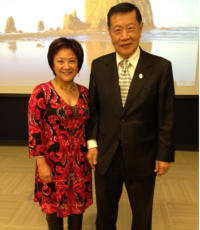 I made stew for Dr. Henry Lee, the world famous forensic scientist. His 8,000 criminal investigations include O. J. Simpson, music producer Phil Specter, the reinvestigation of the JFK assassination, as well as examining atrocities in Bosnia, Croatia and the world over. I expected cool and distant. Instead he is like an uncle, telling jokes, with pockets full of toy badges and forensic postcards.

Later he spoke at the Milton Public Library. As the youngest ever police captain in Taiwan, he moved to America in 1965 with $50 in his pocket. Now he is a world leader in forensic science. “This country is wonderful if you are willing to work hard,” he said.

Examining evidence of hatred and violence is his life’s work. How does he, at age 77, stay so buoyant?

Dr. Lee said, “Usually when I started I had nightmares. I couldn’t understand why somebody would do this to somebody. As I got more involved in forensics, I see more through the victim’s family’s eyes, and I thought that somebody has to help them.

“In the courtroom after a trial, sometimes people are jumping, screaming, and crying because innocent people are going to jail and they wish somebody with integrity can help them. This is basically my driving force.”

He has seen it all: murdered children, serial killings, the soul wounds of families who need closure, the anguish of false imprisonment. The emotionally tortured need answers and certainty. Forensic truth has quelled communities inflamed with rage and mistrust. To bring comfort became his life’s purpose.

“Everyone comes to earth one time. It’s one short trip. Even if you live to be 80, that’s about 30,000 days. I feel I should do something. Everything counts. We have to ask, what did we do to help the world, to leave a mark?”

Every day Dr. Lee rises at 4:30 a.m. He no longer takes time-consuming, active criminal cases. Instead he relishes solving murders through the Cold Case Center of The Henry C. Lee Institute of Forensic Science at the University of New Haven, a leading program that he founded forty years ago.

He now prefers giving direct help. “Ten years ago I was on national and international committees, but no more. Now I’m helping individuals. I have different priorities. I can help a student or a family more than sitting in a meeting or on a board.”

Answers bring peace and he imparts a message of hope and purpose, especially to young people. “I tell them don’t waste your life. My message to students is don’t get into drugs, don’t get into gangs. Don’t get into the nightlife or gambling. Sooner or later we leave this earth. You have to do more than when you started.”

Among a lifetime of awards, he cherishes his 2008 Gusi Award from the Philippines, given to peacemakers. At first he thought they had the wrong Henry Lee. What does criminal investigation have to do with peace? Then he realized that others understood his life’s purpose

“Blessed are those who hunger and thirst for justice for they will be satisfied.” (Matthew 5:6) Dr. Lee has found fulfillment but added, “There is so much to do, so much to finish.”

Published in The Patriot Ledger, October 3, 2015