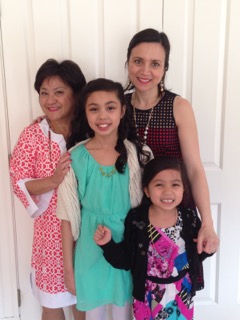 Four years ago, I read this scripture for the first time: ‘‘Before I formed you in the womb I knew you, before you were born I set you apart.’’ (Jeremiah 1:5) The idea is that God already has a purpose in mind for each life, long before a person has been conceived.

It’s a difficult concept to trust in the face of an unplanned pregnancy and 33 years ago, I nearly had an abortion.

Through any lens, my life was dicey at the age of 19. Raised in a poor San Francisco neighborhood with only a high school diploma, career success seemed improbable. My immigrant father refused to send me to college because he didn’t want to ‘‘waste any more money.’’ Though all my friends were college-bound, I was expected to build a career with secretarial skills.

‘‘You’ll only end up getting married anyway,’’ said Dad.

And I did, at 19, by accident. Occasionally, when someone learns that I was married so young, they jokingly say, ‘‘Oh, you were a child bride.’’

I can’t resist saying, ‘‘No, more like a bride with child.’’

Today I can laugh, but back in 1973 I was terrified. Only a year out of high school and I was still living with my parents. Now I was pregnant by a guy whose job prospects were worse than mine.

It seemed an ideal case to exercise a woman’s legal right. Certainly, one friend prodded me in that direction and everything she said made sense: I was too young to be a mother. I had years ahead of me to have kids. Having a child now would cripple my already lame financial prospects. I’d be a drain on my family, and by the way, don’t expect her to baby-sit on weekends.

But another friend implored me to keep the baby, with images of a sweet child toddling toward me, ‘‘the product of love.’’

I wish I could boast that inner strength or faith influenced my decision to keep my baby, but it wasn’t true. At 19, my very low pain threshold was the tipping point.

Many friends shook their heads, convinced of my bleak future.

‘‘For I know the plans I have for you,’’ declares the Lord, ‘‘plans to prosper you and not to harm you, plans to give you hope and a future.’’

Jeremiah 29:11 did not seem like a promise that could apply to me.

Now, 33 years later, from my perspective as a mother and a grandmother, I understand its truth. That passage is about how Babylon took the Israelites into captivity for 70 years. Through the prophet Jeremiah, God instructs them to be resigned, hunker down and make a home, and eventually, he’d deliver them back to Jerusalem, which he did.

Any mother raising children can relate to the living-in-captivity part.

My teen marriage did not last and (no surprise) parenting is not easy or pain-free. But the sacrifices were tempered with a wonder and delight I could not have foreseen at 19. And who could have predicted the helpful and powerful people who ‘‘popped up’’ in my life to propel my career forward, as well as a happy remarriage?

For years I thought I was ‘‘lucky,’’ until I read Isaiah 45:5: ‘‘I am the Lord, and there is no other, apart from me there is no God. I will strengthen you though you have not acknowledged me.’’

My daughter Star, now 33, became the best part of my life. She was set apart for a purpose, and if I had to guess, it seems that purpose is to be a fifth-grade teacher and the person who led me back to faith.

On the other hand, countless women who opted out of pregnancies will report that the road not taken worked out well for them.

I’m not selling tickets on the guilt trip.

Nor would I heap more sorrow on the regretful, those women who could tell you to the day how old their children might have been. What’s done is done and divine grace has no limits.

Who can accurately predict how things turn out? Not us.

The best intentions and the most detailed planning may not place you where you expect to be. John Lennon once wrote, ‘‘Life is what happens to you while you’re busy making other plans.’’

Being uncertain naturally causes fear. But there is a merciful beauty in not knowing the future. It gives one hope for the possibilities.