A Christmas Party in Prison 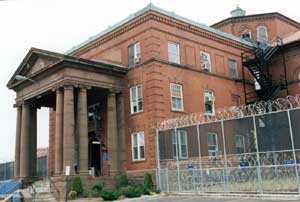 I had my first Christmas in prison.  No, not as an inmate.  In 1998 I was a Bible study volunteer at Webster Correctional Institution, a low security prison for men in Cheshire, CT (since closed).  That year we threw a Christmas party for the 9 inmates in our group.  However, word got around and 50 prisoners came.

On party day hungry men milled around the food tables. I was at the pie station, handed a slicer and told, ”Don’t let that cake server out of your sight for a minute.”  I firmly gripped the handle.

I had never seen anyone eat like that, but I don’t mean piggish or brutish. All were very well behaved.  I mean eating that was so unhealthy and excessive.  The typical styrofoam plate was topped with four chocolate chip cookies, one piece of carrot cake, pecan pie, tortilla chips, and a mound of salsa, missing only a chocolate partridge in a pear tree. My arteries clogged just looking at the sugar intake.

I had arrived at 2:15 p.m. and by 2:20 it was all gone.  What’s the surprise? They’re prisoners and they’re going for the gusto!  Somehow I had envisioned a cocktail party setting (sans the alcohol) where everyone leisurely picked and poked at the food.  Here the men were like little kids, piling on the cookies and pie, thanking us profusely, their mouths filled with carrot cake.

Afterwards, we sang Christmas carols to a scratchy tape.  There we were, tone deaf and braying “It Came Upon A Midnight Clear,” belting out “The First Noel,” and giving high fives whenever we hit the high C’s in “Hark The Herald Angels Sing.”

One inmate, Leon, should have been a professional. When he sang, ”Where You Lead, Lord,” his melodic voice boomed as if he had been trained to sing in a stadium. After he encored with a Lionel Ritchie ballad, it was back to Christmas caroling.

Soon everything was cleaned up (courtesy of the inmates) and it was time to go.

Suddenly David, a young man, held up his hand, ”I’m happy to say I’m getting out next week, and I just want to say that you guys are real nice to give us this party, and I learned a lot here.  I mean you guys don’t know us.  But every week you come when you don’t have to and you care enough to bring all this stuff.  And it’s really taught me something.  A better way to live.  And now I find myself loving people I don’t even know. ”

Smiles, silence, and then a volunteer suggested a final song.  Ideas were thrown out, ”Silent Night!”  “Let There be Love!”  “Under the Boardwalk!”  Then Leon boomed out a title and everyone agreed. In his massively commanding baritone, he led us all in “The Star Spangled Banner.”

And I have never heard more emotion and strength poured  into the ending words, “Land of the Free and Home of the Brave” as sung by the incarcerated on that rainy Tuesday before Christmas.