BALTIMORE: THE WAGES OF RIOTING 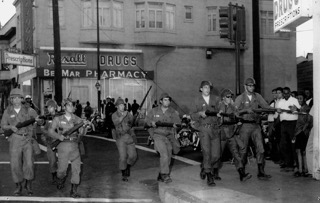 Until police tactics that license aggression and brutal handling are changed, there seems no end to the cycle of death-fear-retaliation-destruction on all sides. Until brave leaders emerge to overcome despair with forgiveness and real tools for effective change, there will be none. Violence only begets violence. As Baltimore battles chaos, consider the victims of rioting.

This epidemic of deaths of African-American youths at police hands is not new. In 1966 the police shot and killed 16-year-old Matthew Johnson, an African-American, in the Bayview Hunters Point area of San Francisco where I grew up. I was 12 years old, now I’m 60.

Back then the rioting lasted for five days. My family lived two blocks from Third Street, a main avenue of stores and businesses, and each one was smashed and looted. It was 128 hours of rampage. We stayed indoors, praying the violence would not spread to our street.

When I was growing up in my Filipino-American family, I was naive about racism. My street had African-American families and just as many of Mexican, Maltese, and Italian ancestry. When you’re a kid, you only know the world through your immediate neighborhood, and mine was very diverse.

During the riots, the National Guard marched down McKinnon Street, right in front of my house. It struck me as strange that my black neighbors stayed indoors. All except for the teenage Ferguson brothers across the street from us. They were standing on their porch, a few stairs up to their house. Like everybody, they watched in amazement as an entire battalion moved down our street.

One soldier broke ranks, and pointed his rifle at Bobby and said, “Get your black ass back inside or I’ll shoot you.”

At the age of twelve, I was shocked, scared, and feeling helpless for them. I was confused as to why they would be picked out in such a brutal way. Suddenly I understood the rage fueling the riots.

However, no good came of destroying neighborhood businesses. The violence only made many innocent young black men like the Ferguson brothers targets and suspects. Overnight our neighborhood collapsed. For a long time, Third Street was boarded up, and slowly reopened with liquor stores, quick check cashing places, cheap trinket shops; all places normally associated with poor and purposely avoided neighborhoods.

The Bayview Hunters Point carried a “high crime” scar that lasted two generations, scaring off investors and homebuyers, the kind of isolation that breeds crime. I left for good in my early twenties, and later we forced my mother to move when fences were broken down and pit bulls ran through backyards on McKinnon Street. A house across the street had bullet holes from a drive-by shooting. That long-ago riot still had its effects.

Almost fifty years after young Matthew Johnson was killed, my heart hurts at the continued deaths of African-American youths at police hands. I see the fear in my friends for their own children, and I know it’s based on documented history. I understand the desire to push back against oppression. However, the destruction of property does nothing to honor the dead. Looters are selfish opportunists. Those left behind in abandoned neighborhoods carry the burden, and righteous rage loses its morality when channeled into destruction.