Charleston Shootings: The Darkness Will Not Overcome 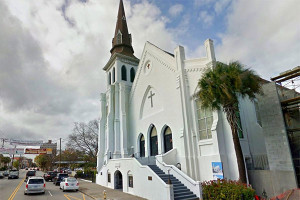 Holding on to Jesus Christ in the darkest of hours is the bond among families whose loved ones were gunned down during a Bible study at Emanuel African Methodist Episcopal Church in Charleston, South Carolina on June 17.

Many unfamiliar with the Bible may think it archaic.  Yet in the unspeakable tragedy of the Charleston shootings, victims’ families professed the power of Jesus Christ to transform hate into love, and despair into hope.

The lack of vengeance and rage, even during the freshness of excruciating grief, surprises a nation. After all, those grieving are not spin doctors or politicians using religion for personal aims.  Some conjectured it was the strength of the African-American community, or perhaps the culture of Charleston, often called the “Holy City,” because hundreds of churches minister within its164 square miles.

For the grief-stricken, they credited their strength to Jesus Christ. They are everyday folks trying to walk the talk of Christianity.  Adversity and suffering tests the depth of conviction, and their footing is firm.

At the bond hearing for the accused mass murderer, the nation saw uncommon compassion and forgiveness in statements made by the victim’s families. These are just two.

“You took something very precious from me and I will never talk to her ever again. I will never be able to hold her again. But I forgive you and have mercy on your soul,” said Nadine Collier, daughter of victim Ethel Lance.

Anthony Thompson, husband of slain Myra Thompson, said, ”I forgive you. But we would like you to take this opportunity to repent. Repent, confess, give your life to the one who matters most: Christ. So that he can change it, can change your ways no matter what happened to you and you’ll be OK. Do that and you’ll be better off than what you are right now.”

Dylann Roof, 21, admitted to raining bullets on innocent believers to start a race war but no riots took place.  Instead, there was an en masse giving-over to God by blacks and whites alike.  A concerned nation talks about racism, mental illness, and gun control. Yet these Christians know God is in control and in that belief, they wait patiently on the Lord. Hebrews 11:1 reads, “Faith is being sure of what you hope for and certain of what you do not see.”

Jesus promised a place for those who belong to him as surely as a perfect judgment for each.  He never promised easy passage in this life.  Meanwhile, one must practice patience, faith, and love. John 1:4 reads, “In him was life, and that life was the light of all mankind. The light shines in the darkness, and the darkness has not overcome it.”

For observers everywhere, Christians in Charleston show how walking in the light is done.