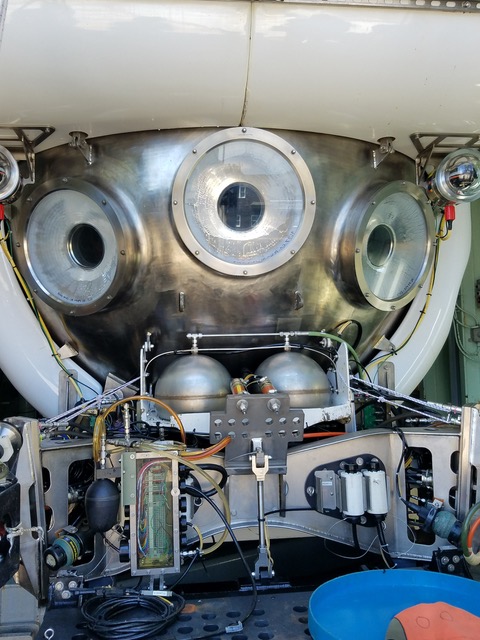 (The Alvin carried aboard The Atlantis at Woods Hole Oceanographic Institution, photo taken by Suzette Standring)

We toured the Atlantis and the Neil Armstrong, research vehicle ships, at the Woods Hole Oceanographic Institution (www.whoi.edu) in Massachusetts. The men and women who work  toward the health of our oceans reminded me of Psalm 107: 23-24 inscribed on a Gloucester memorial to honor fishermen lost at sea.  They who go down to the sea in ships, they who do business in vast waters, they see the wonders of the deep and the glories of the Lord.

Ours was a private walk-through led by Ed O’Brien, Dive Operations Manager, whose job at turns, is awesome and crazy dangerous.  Depending on the assignment, his diving suit can be lightweight kevlar, or a 1,000 lb. gear-laden hazard suit.  He expects the unexpected.  While working to raise a barge from over a hundred feet down, he lost his footing, and was trapped underneath the massive structure.  Once he and another diver met a school of squid, just as curious as they were.  “It’s like they were interacting with us,” he said.  Off the Greek Island of Antikythera, O’Brien, along with an elite team of Greek SEALs, rescued artifacts from an an ancient shipwreck, circa 85 B.C.E. 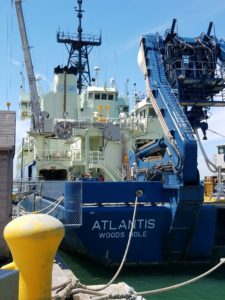 Deep sea exploration is astounding. The Alvin, an exploratory vehicle,  can descend three miles underwater.  From this manned capsule, new life forms have been discovered that live off chemical gases instead of oxygen near hydrothermal vents.  Elsewhere in the WHOI laboratories, a projectile-shaped research vehicle, REMUS SharkCam, filmed attacks by Great White Sharks on the capsule, with bite marks on its exterior previously thought to be impervious.

O’Brien travels the world on research or marine repair dives. Trained in sea rescue, maritime transportation and repair, diving, and firefighting, he taught at the Massachusetts Maritime Academy.  When encountering the incredible, is he filled with a sense of wonder?  Not at the moment of wonder,  due to focus on safety and getting the job done.  Typically, wonder follows later.

“Subconscious skills” have served him well, such as the ability to stay calm and to make the right decisions based on training.  Religion and science are not mutually exclusive, and he acknowledges a higher power, “When you look at the diversity, and see how complicated things are.”

What does it take to be a professional diver, one of the most dangerous jobs on earth?  He refers to self-assessment as “having a spiritual conversation with yourself.”  “Are you up for the task?” is a loaded question about preparation, temperament, and resourcefulness.  Constantly, scientists invent new ways to get things done.  O’Brien said, “Only time will validate your efforts. Sometimes the technology has to catch up with your ideas.”

Scientific stewardship of the oceans is an important life purpose.

O’Brien lives a simple formula. “I concentrate on what I do and I do my best.”