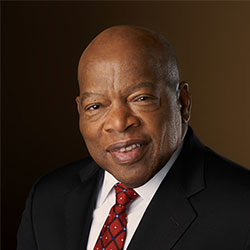 John Lewis, longtime U.S. congressman and civil rights icon for “good trouble,” was buried on July 30, 2020.  The Georgia legislator was legendary for his lifelong patriotic protest and dissent against inequality.  He played major roles in the Civil Rights Act and the Voting Rights Act.  I once held his hand.

Few can connect the signing of the 1965 Voting Rights Act with getting their heads cracked open.  That’s what happened to him and scores of African-Americans on “Bloody Sunday” on the Edmund Pettus Bridge in 1965.  Their peaceful protest for equality in voting was met with violence by state troopers. Lewis was unconscious from a fractured skull and never knew how he made it to a hospital.  Nationally, the brutality was televised, and days later, The Voting Rights Act was signed into law.

But Mr. Lewis’s work did not end there.  The respected legislator was a voice of conscience to those who might prefer easier, palatable solutions to burning issues of social injustice.

Nowadays boldness takes the form of name-calling and blame on social media.  Today character killing is done from a distance by tweets.  Tit for tat fingerpointing, “What about (fill in the blank),” frames our national conversations.

But John Lewis gave front-line physical boldness as a clear thinking advocate for equality.  Anyone can google his illustrious career. I will say that to have heard him in person, a man mighty in historical undertakings, took my breath away.

I was there in 2017 when Mr. Lewis received The Gleitsman Citizen Activist Award from Harvard University for his leadership in social change that improved the quality of U.S life. Today’s higher awareness and necessary action for equal treatment continue on the foundation he built with other heroes.

In 2017, my lawyer friend, Janet Mangini, was invited as a 1998 award recipient for her work against the tobacco industry, which enticed children to smoke.  You don’t see those Joe Camel ads anymore, do you?  I was her guest.

How refreshing (rather novel in today’s terms) to hear Mr. Lewis ascribe no blame and to have no bitterness from the past. His approach was find unity in our humanity. Just keep fighting the good fight.

I wanted to hug him in person, but alas! Long lines formed to shake his hand.

I stared longingly from a distance as Janet visited with colleagues, and finally we made our way to the exit.

Oops! Janet forgot her scarf and ran back inside to find it.

Suddenly, Mr. Lewis appeared, all alone like an apparition.  I thought, “Where’s Janet?  I need her to take a photo!”

But it felt selfish to subject him to yet another tedious snapshot. Instead, I could only stammer, “Mr. Lewis, your life has meant so much to me.”

He smiled and said, “Thank you.  Do you think you could help me down the stairs?”

He offered his hand, and then, arm in arm, we descended the steep, stone steps, and I was wonderstruck at touching greatness.