Kobe and Gianna Bryant: It felt personal to me, but why? 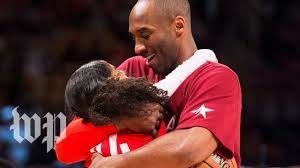 The tragic deaths of Kobe Bryant, his 13-year-old daughter, Gianna, and seven others in a helicopter crash felt intimate to me, though I do not follow sports, nor have I ever met them. Yet imagining the sudden loss of a father and daughter is a dread I can feel in my bones.  Also, all of us are subject to the randomness of life.

I cannot imagine the sorrow of losing a husband and child at the same time, which his wife, Vanessa Bryant, bears. Bereft of their dad and sister are daughters Natalia, 17, and Bianka, 3.  Capri, who was born in June, will never know them.  The pain and suffering of the families of the others who perished are the same.

The tragedy stirs a space in my heart that feels the permanent tearing of family fabric. How impossible it might be to ever feel whole again.  Kobe Bryant was taking his daughter to play in the Mamba Cup Tournament Series, a high level youth basketball competition he founded. His teen daughter was a basketball zealot with athletic prowess, which Kobe encouraged.  After his retirement from the Lakers,  the game came alive again through his daughter’s passion, which they were sharing on that fateful trip.

That same Sunday of the helicopter crash, I was at my 11-year old granddaughter’s basketball game.  There, other families cheered their girls as they dribbled down the court and made their shots.  The winter day was warm, boosting banter and high spirits, everyone wearing light jackets, and savoring rare sunshine on their faces.

Later we heard the news.  And just like that, we all knew any one of us could have been struck by tragedy like Kobe Bryant and his daughter.

I was dumbstruck by their deaths, as one presumes that money and prestige are the most effective talismans for protection: the best service, the best advice, served by those whose jobs are to watch out for you.  Kobe Bryant was 41, whip smart and strong.  Kobe Bryant was global.  That kind of celebrity shouts invincibility. It’s a realm I don’t understand because I’m not in it.

But just like us, he was having family fun, taking time to nurture his daughter’s dreams by watching her play. He traveled with good friends who were parents, too.  Friends who also perished, leaving behind a wake of grief.  This I do understand.

And this I don’t.  Why folks in the middle of good times, doing loving things, then star in a tragedy. Everyone on that helicopter, bent on promoting sports among passionate young atheletes, are struck down in the bloom of youth and vigor.

It’s unfair, but then again.

Perhaps randomness is fair because chance plays no favorites. The future is subject neither to prediction nor control. Against all odds, people die while others survive. Tomorrow is not guaranteed.

So the best I can hope for is to be like Kobe Bryant who lived his life and talent with all his heart and strength.  To love and hold close those you love while you can.

This column ran through GateHouse Media on January 27, 2020 and The Patriot Ledger.