Now we are in Cebu, the largest city second to Manila. The wooden cross planted in the Philippines in 1521 by Ferdinand Magellan is displayed at the Basilica of Santo Nino in Cebu City.  We had a look-see and it’s a cross within a cross since the original is encased in tigala wood for protection. 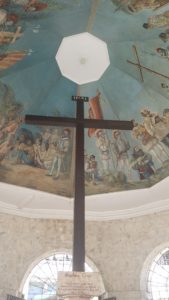 Mark the moment 500 years ago when Christianity, specifically Catholicism, was planted in the Philippines by Spanish and Portuguese explorers, a faith that remains a powerful force today.

I view Magellan’s arrival like a Columbus Day, two-sided coin. One side marks a beginning for the newly landed, and for those already here, the beginning of subjugation. Like Columbus, Magellan took a wrong turn looking for the Moluccas Islands, and ended up in Cebu.  History says he befriended the local rajahs, especially Rajah Homabon and his wife Juana, whom he baptized very soon after.

Now how did Magellan convert them to Christianity so fast? The native Cebuanos spoke a dialect more akin to Malay than to the languages of Spanish and Portuguese. The explorers didn’t know where they were, much less to have an interpreter handy. Enlighten me, please, on this tiny detail. 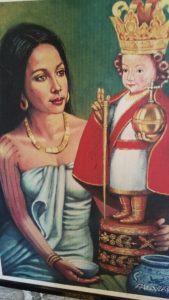 But we do know he gave a statue of the Holy Child to Queen Juana.  This painting is an artist’s imagining.  The actual little Jesus statue wears a rich and embroidered robe, a gilded crown, and has the sweetest baby face. I wonder if giving her such a captivating idol sealed the deal?

That 500-year-old statue is on display at the Basilica of Santo Nino in a glass case. No photos allowed!  Security is on hand to ward off any scofflaws.

So I’m sorry that mine came out blurry. 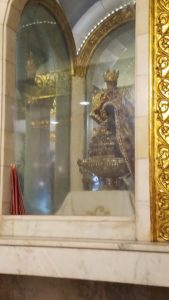 But let’s get back to Magellan. He arrives on March 17, 1521, quite the busy bee with conversions.  Then he proclaims, in effect, how’s about you tell all your chieftain friends to bring food and supplies to my soldiers, recognize Spain as the new authority, and everyone converts to Christianity?

Not such a great idea to Datu Lapu Lapu, another chieftain leader in Cebu.  Hold up. You want me to bring you food and bow down?

His warriors killed Magellan and his soldiers about five weeks later on April 26, 1521. The first resistance to an invading power is memorialized in Cebu by a huge statue of Chief Lapu Lapu. 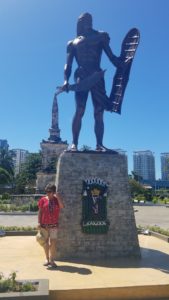 Nonetheless, 40 years later, the Spanish returned, and this time, they took it all for the next three centuries. The Philippines is named after King Phillip II of Spain and native Filipinos were forced to take Spanish surnames.

Much later on our tour through Cebu,  a museum guide at a historic home, told me, “Filipinos were not forced. They were encouraged to take Spanish names.  For example, some of the Chinese merchant class did not change their names.”

He added, “But of course, then they couldn’t do business with the Spanish.”

I said, “Well, that sounds like being forced to me. Change Wong to Gonsalez or we close down your import business, right?”

The guide chuckled and said, “Yes, you are right.”

So historically, that’s why my maiden surname is Martinez.  Other ancestral surnames in my Filipino family include Alvarez, Jardeleza and Andrade.

The above is the long answer to a man who once asked me, “I thought you said you were Asian, so how come you have a Mexican last name?”