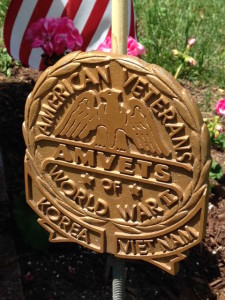 The dead have badges and I stop to read them: 1941 World War 1945, Women’s Relief Corps.147, The American Legion and more.  Small American flags flutter next to soldiers’ graves at the Milton (Mass.) Cemetery in preparation for Memorial Day. At a glance souls, long gone, wave across the acres, “Over here!” “I served!” “Me, too.”

I love walking along the knolls and curving paths of Milton Cemetery, founded in 1672, a resting place that began with early settlers and through the generations has included the graves of Revolutionary War, Civil War, and modern day war veterans. 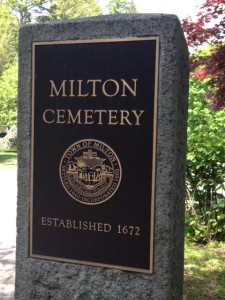 This weekend in preparation for the holiday, American flags next to military graves are reminders of what strangers did for me. 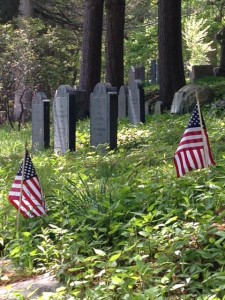 During my walk, a flame-haired woman waters begonias and pansies next to a grave marked “Nash,” and a small flag stands at the side of the stone.  “What a beautiful little garden,” I say.

“Ah, the wild turkeys have scratched away all the compost,” she replies in a rich brogue.  She means the mulch, almost as red as her hair, now raked back into place. 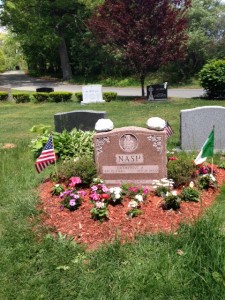 Elsewhere visitors in the cemetery dust off stones, weed dandelions, and prune the small bushes that mark the graves of soldiers past.  Their acts of loving focus personalize the cost of war and the sacrifice of military service by millions of soldiers.

This weekend our entire nation lends the same tender attention to the memory of those who made the ultimate sacrifice to serve and protect.  A most meaningful Memorial Day to all.