Visit Prisoners (but isn’t it easier just to collect food and clothing?) 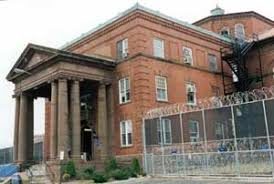 (Webster Correctional Institution in Cheshire, CT where I volunteered.)

Visiting prisoners is encouraged in the Bible, along with feeding the hungry and clothing the poor. Yet for many, it’s less scary to collect food and clothes. Comforting prisoners is listed last in Matthew 25:35-36 when Jesus said, “For I was hungry and you gave me something to eat, I was thirsty and you gave me something to drink, I was a stranger and you invited me in, I needed clothes and you clothed me, I was sick and you looked after me, I was in prison and you came to visit me.

In 1996 I studied with felons.  No, not as an inmate, but as a correctional volunteer in Connecticut. I was new to town and my neighbor, Phyllis, asked me to join her prison Bible group.  But wouldn’t my fallen-away status as a Catholic disqualify me?

“We’re short-handed, so let’s not stand on ceremony,” she said.

I went through a prison application process, asking myself how could I help anyone, especially since I rarely read the Bible then? What about safety? How scary would these men be?

In a cellblock space, I met retired volunteers. Each felt faith had called them to prison service, and they were just answering the spiritual phone.

That day, the topic was forgiveness, brought up by 30-something Owen. Educated and handsome, he had been a successful contractor prior to his manslaughter conviction.  He had killed a man while driving drunk.

Owen was angry the board rejected his parole request because the victim’s family opposed it. He railed against their inability to forgive him, and asked, “They’re Christians.  Where’s their forgiveness?”

Phyllis stated the obvious, “Yes, the Bible says we should forgive, but you killed their son. It’s not for you to dictate the timetable for their forgiveness.”

Owen asked, “Then what’s the point of the Bible teaching forgiveness when it probably won’t happen?”

I said, “It’s true. They may never forgive you but that is not under your control.  What you control is your own change.

Maybe someday when you get out — and you will — you’ll lead the kind of life where future friends might say, “Wow, I can’t believe you ever did time. You’re such a good guy.’”

Phyllis added, “We’re not here to judge you or others, but to offer hope and a map for change and redemption.”

Later, attendees grew from three to 12, and the rewards, insights, and comical moments were rich.  Later in Massachusetts, I occasionally did volunteer prison stints.  What surprised me is the change and redemption I found within myself.  Go outside your comfort zone. Volunteer.

This column ran in the Patriot Ledger and nationally through GateHouse Media, 1/14/2019.