When Stand up Comedy and Column Writing Meet 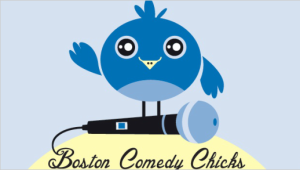 Life is an unexpected ride. I’m a columnist who presents writing workshops, maybe the occasional keynote.  But standup comedy? Terrifying! I am not that gal.

On a lark I did a Story Slam recently. The theme was “Believe it or Not” and in the five minutes allowed, I shared a funny version of getting carjacked in 1995. I won second place.  (How did my near abduction get one-upped by somebody else? Brutal. I have to try harder.)

“Thank you, but I’m no standup” and I sat down.

Then Maxfield emailed me. Based on Lovett’s say-so, she wanted to put me on the April 19 Boston Comedy Chicks lineup to tell my story. Insane! Ridiculous!

My rationale: whenever the window of opportunity opens, I dive through.

However, bombing at the mic could be like smacking the concrete 20 stories below, so I went to a comedy workshop to hone my story.

Belief and conviction are required.

Trim the fat, get to the point quickly.

In live comedy, tempo and timing are the same as rhythm and cadence in writing.

Obviously, a live performance is exhausting compared to pushing the send button to an editor.  Stand-up is physically and mentally taxing.  Imagine saying a line 17,000 times so its sounds genuine, freshly made up, off the cuff.  This is a great ability for actors and spies.

At the comedy workshop, each person had to perform three times to new feedback about body language, timing, suggestions on how to make it funnier, snappier, more absurd. Jokes and one-liners zinged across the table, and I sat there, mute. I can’t compete at that level of wit and spontaneity.

But so what?  I was there to polish my carjacking, not to open for Chris Rock.

Even if my comedy debut with Boston Comedy Chicks proved to be my one-time stint, I came away enriched with new tools for teaching and public speaking.

It’s a ride down an unbeaten path, and that’s where treasures are revealed.  Just keep your doors locked.