A Jewish temple rises in Milton 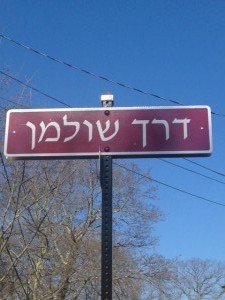 At Congregation Beth Shalom of the Blue Hills I sit by the gallery’s fireplace with Lila Rosenbaum, 86. Sunshine warms our backs from the wall-high windows and she speaks of finally “having a home.”

The 9,500 square foot temple is tucked to the side of an open field by a stand of old growth trees and built on 1.9 acres of land donated by members Marvin and Andrea Gordon. His grandparents, Samuel and Bertha Shoolman, were the first Jewish residents of Milton, Massachusetts and operated a kosher dairy farm in 1920s.

The sanctuary uplifts me with feelings of ascent and soaring. Light plays on the blonde maple wood and muted gray tones. Nature streams through the wall of mammoth windows facing east on which the ark is centered.

Here the Torah scrolls will be housed, the uppermost place reserved for The Holocaust Torah, which survived the Nazis in Europe and is here on permanent loan. The threshold of the ark is a slab of honey-hued limestone called Jerusalem stone as it has been used since ancient times in the holy city.

Temma Gentles, an artist in Ontario, Canada, designed the 300-pound parochet — a curtain which covers the ark doors. Mimicking stained glass, the fabric background is stitched with remnants from Gentle’s wedding dress, swatches from her grandparents’ textile mill, necktie pieces from a departed friend. Over the quilting, laser-cut metalwork forms trees, with overhead stars symbolic of the 12 tribes, and the phrase, “Who in goodness daily renews creation.”

Over the years with temple mergers and closings, artwork, metal plaques, and artifacts were stored. Many things could not be used. Giant stained glass windows from Temple Beth El in Quincy were donated and shipped to Hebrew Union College — Jewish Institute of Religion in Cincinnati, Ohio.

Thousands of memorial plaques posed the same quandary. Upstairs, inside the “memorial room” a candle flickers on a flat panel screen that holds a database of 2,000 departed members. Type in a name to see a photo and snippets from that person’s life. The room’s low lighting creates a meditative mindset.  Milton resident David Ehrmann, co-chair of the architecture and design committee, said there was initial resistance to such a modern display, but soon members found the new technology to be more personal and informative.

I ask, “How long have the people here been…”

“Wandering?” Mrs. Rosenbaum finishes my sentence and laughs. Since the 1950s she’s seen three temple mergers until the sale of their former synagogue. For at least four years, Congregation Beth Shalom of the Blue Hills has operated their offices and programs in different places and used space at the First Congregational Church in Milton, all while searching for a new site for its 140 member families.

“About 60% of the congregation was involved in the planning and design and physical labor of bringing the temple to fruition,” said Ehrmann.

The temple’s new kitchen does the Jewish great-grandmother proud, perfect for schmoozing, noshing, laughing, and learning how to make kugel.

It’s a synagogue both multi-generational and egalitarian, a spiritual and community home at long last to call their own.