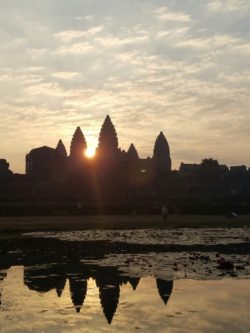 In Cambodia, David and I stand among teeming crowds to watch the sun rise over Angkor Wat, a 12th century temple.  It’s 6:00 a.m. and already onlookers line the edges of a moat filled with blooming waterlillies.  I hear a woman say, “I thought if I came early, I’d have the place to myself” and I laugh. 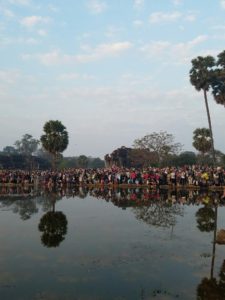 About 14,000 people visit Angkor Wat daily and dawn is the best time to avoid the oppressive heat.  Like one huge, unwieldy organism at the West Gate, we hold our breath, and when the sun pierces, strong and gold through the highest towers, everyone cheers.  I am present.

Strangers traveling to the world’s largest religious monument is our bond.  At sunrise, it is like Babel in the Bible, exclamations in many languages. As night turns into day I wonder how many pilgrims have journeyed over centuries to watch that moment here.

Dating back to about 1113 AD, Angkor Wat originally was a Hindu temple, but became a Buddhist temple in the late 12th century. Situated on 518 acres, it was built by the Kampumera, the ancient Cambodians. The construction involved 50,000 workers and 700 elephants, according to our guide. 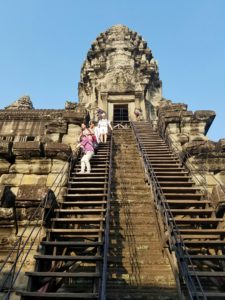 The ascent into the temple is harrowing and steep on tiny stone steps. From those dizzying heights I imagine visitors had to climb on hands and knees, and they did until 2009 when wooden stairs were built for tourists.

Our guide replied, “Oh, yes, many accidents, but there are walkie-talkies.  We call for help.”

As one former visitor said, “If you fall, forget an ambulance.  Call a hearse.”

Huff and puff up the steps, and enter the temple, a complex of stone courtyards and inner rooms.  A royal compound was once part of Angkor Wat for the king and his families and one sovereign had about 400 concubines.  That’s a lot of housing.

Long stretches of wall carvings tell of ancient Cambodian battles, but I was most fascinated by the bias reliefs of heaven and hell, which don’t pull any punches. Set in stone, bad folks are attacked by alligators, chomped by demons, or skewered through and rotisseried.  It would give anyone pause.

About 1,800 “apsanas” or carvings of heavenly dancers grace columns and walls. Here and there, a massive deity looks down. By 1431, the city of Angkor Wat was abandoned and the temple ruins continue to be restored.

Walking through is a marvel.  How did a 12th century people build this spectacular complex?  A grounds exhibit shows tools and ingenious engineering to hoist massive stones and put them into place, all without mortar. 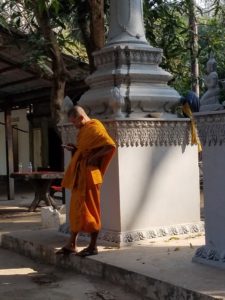 I saw a monk with an iPhone.  He slouched against a wall in orange robes, scrolling through his screen.  The incongruity captured the modern and ancient, and how I cannot begin to comprehend how it all fits together.  The answer is what the Buddhists have said all along.  Just be present.

This column ran in The Patriot Ledger on March 5, 2017 and nationally through GateHouse Media.