Columnists in Indiana – What Suzette the Tourist Saw 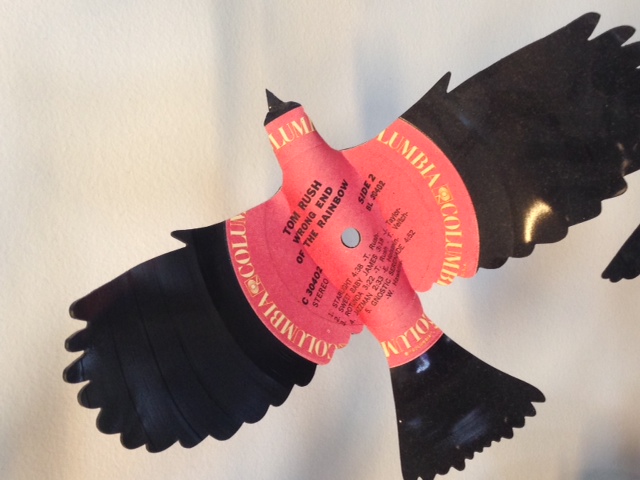 Clearly, Hoosiers are a can-do people. Returning from the annual meeting of the National Society of Newspaper Columnists held in Indiana (June 25-28),  I feel rejuvenated with writing purpose.  Indianapolis itself is a warm and welcoming city, full of memorable sites, and I’m lucky I had a chance to visit.

That’s the beauty of local columnists “on the ground” planning the conference.  They know best how to show off their city. Co-chairs Amanda Hillard Beam and Michelle Freed Momper, your mission was accomplished in style!  (Now you can have your lives back). 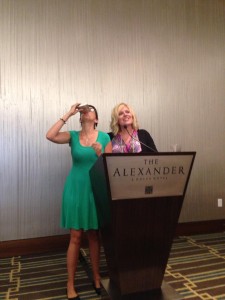 (Too) hardworking co-chairs Amanda and Michelle open the conference

I could write a treatise on this trip but I will share my conference highlights in two parts on this blog: Suzette the Tourist, and later Suzette the Student.

So Indy sites first, since I’m a gal who loves to experience new places. 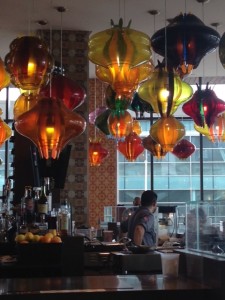 The Alexander Hotel was a marvel, with a spacious room and a super comfy bed.  The blackout shades made me sleep long and deep.  I must explore that as a possible insomnia cure.

This is a photo of the enchanting light fixtures just over the lobby bar.

The hotel’s  artwork was museum quality.  For example, artist  Sonya Clark created a portrait of Madam C.J. Walker II from 3,480 plastic combs to honor the first African-American millionaire whose business was based on hair products. 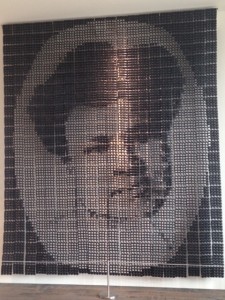 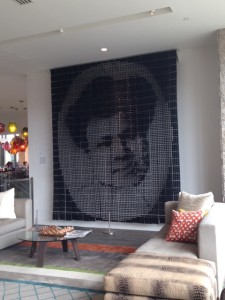 On another lobby wall,  “Anthem” was a large and whimsical flight of birds formed from vinyl LP’s that were found in the mud, post-Katrina, in the lower Ninth Ward of New Orleans by artist Paul Villinski. 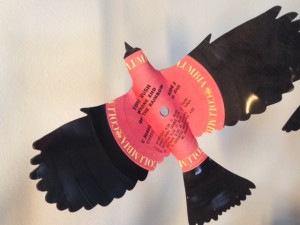 Closeup of bird made from vinyl LP 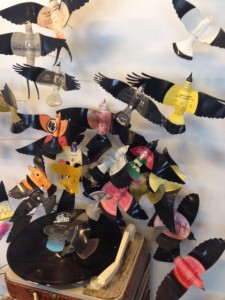 Thursday night’s meet and greet was held at Scotty’s Brewhouse, where it’s always fun to reunite with old friends and meet new ones.  Throughout the conference, connections and memories were made, especially in the nightly hospitality suite held on the Alexander’s rooftop terrace or in a luxe suite. 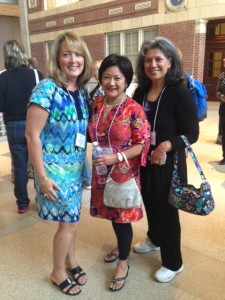 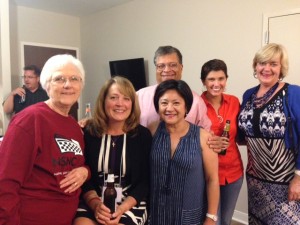 Friends in the NSNC hospitality suite 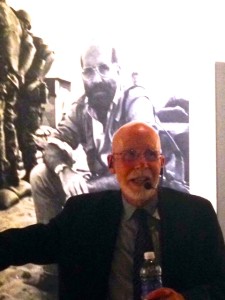 Bill Foley, now and way back then 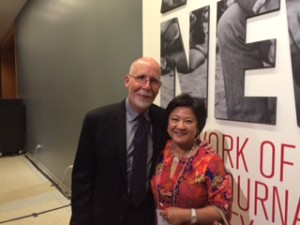 After a full day of educational programs on Friday (more about those in a separate post), we went to the Indiana Museum for a special dinner, where Pulitzer Prize winner Bill Foley himself led us on a tour of an exhibit of famous works, “Art Meets News: The Work of Photojournalist Bill Foley.”

During his long career as an Associated Press photographer, he captured major historic moments:  The Egyptian-Israeli Peace Accord, the bombing of the U.S. Embassy in Beirut, and he took the last photograph of Egyptian president Anwar Sadat minutes before Sadat was gunned down.  At those two latter events, he narrowly escaped death, and it was chilling to hear the stories straight from him. 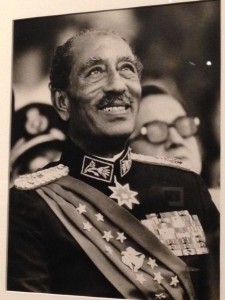 The exhibit was wall after wall of remarkable, moving photos with Foley sharing stories of his career in the Middle East.  He is a gentle, modest man and every attendee received a photographic postcard of one of his works.  Mine was of Irish step dancers performing in silhouette, and he autographed it for me.

On Saturday, after morning programs, we lunched at the Kurt Vonnegut Library.  It’s small but fully curated with Vonnegut’s literary works and artwork.  The typewriter he used was on display, and the staff is passionate.  The food, catered by Yats Cajun Creole, was spicy, wholesome and tasty. 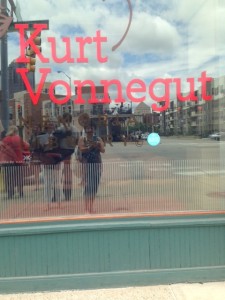 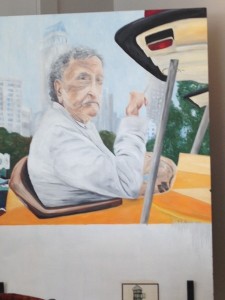 After our visit to the Vonnegut Library, I blew it big time.  Everyone was taken to the Indy 500 for a private tour, and where for the first time in years, the columnists were taken for a ride around the entire track.  But not me.  No, I wimped out and went back to the hotel.  “I’m too tired,” she whined.  Since race cars are not my thing, I wanted to hop over to the mall near the hotel for a look-see.  Big mistake! (Although I did find a cute new dress.)  Later everyone I talked to said the Indy 500 experience was incredible, outstanding, and unique.    If this were a village, I’d be the idiot.

Late in the afternoon, back at the hotel, there was a book signing later, and guess who was sitting there giving away free downloads of her newest book to the columnists?  Miss Manners aka Judith Martin, who is the NSNC 2015 Ernie Pyle Lifetime Achievement Award recipient. I had a chance to convey greetings from Lizzie Post, who is the great-granddaughter of another manners maven, Emily Post.  Ms. Martin said, “Ah, how lovely.  There are so few of us in this field. We cherish each other.” 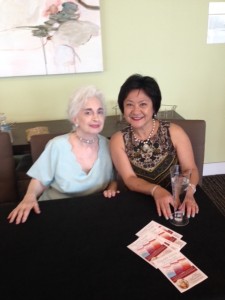 And we cherish you, Miss Manners,
Judith Martin and Suzette Standring

Maybe she should include a chapter in her etiquette book on public selfies or intrusive fans because everyone was asking, “Can I take a picture with you?”  “Can I take a photo?”

I was no better. 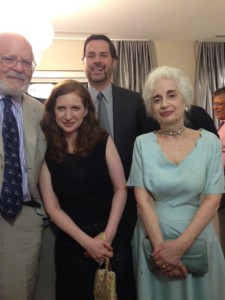 Judith Martin with her family.

After the Saturday awards dinner, Miss Manners even brought her entire family with her to socialize with us in the  hospitality suite.  Gracious and kind.

And speaking of photos with fun people, on the night of the Ernie Pyle Lifetime Achievement Awards, guess who attended?  Wynn Maschino who is the first cousin, once removed, of Ernie Pyle himself!  She attended with her husband Gerald Maschino who heads the Ernie Pyle Foundation. 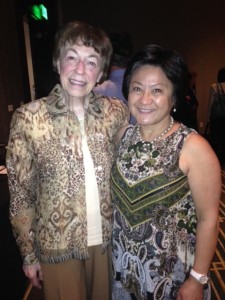 Ta for now, and next time I’ll share what I learned at the conference. It was fun taking you on an armchair tour of Indy sites, Hoosier know-how and hospitality.  Amazing. 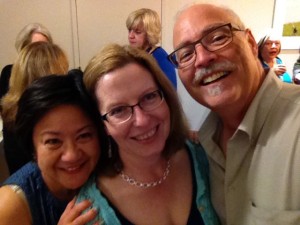 PS:  Next year, the NSNC will meet in Southern California, and over the last 15 years of my attending, I have never been disappointed.  Visit the website of the National Society of Newspaper Columnists or join the FB page of Columnists Clubhouse to read posted works by columnists. 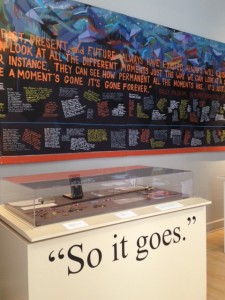