A Dog’s Purpose: They Save Us 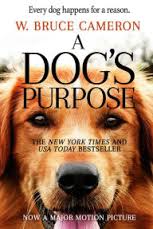 We choose our dogs, sometimes through rescue, but in the end, our dogs save us.  This concept is brought to life in the new movie, A Dog’s Purpose, based on The New York Times bestseller by W. Bruce Cameron.  A romp through reincarnation shows how Bailey, a Golden Retriever, starts off as a beloved pet. After death, Bailey returns to life as a German Shepherd, a Corgi, and as a large mixed breed, each time retaining memories from the past, each time with a mission to serve.  The movie differs from the book, but the effect is the same.  To prize our pets for the hole they fill in our hearts.

A Dog’s Purpose is a tearjerker, yet it feels both noble and sweet. It is hard to watch the ending of a beloved dog’s life, even as its spirit zooms into a new incarnation in the movie.  Yet in between, there is unconditional love, just like in real life.

A Dog’s Purpose is a metaphor for our own lives without the complications of human frailties.  It distills life purpose into the simplest terms.

Why are we here?  According to Bailey the Dog, it would be to live and love fully, and to find someone to save and to save that person.

Over my own 40 years, each pet I loved represented a time period and the person I was from my 20’s to now my 60’s.  Juneau my wolf hybrid was my first dog when I became a first-time home owner.  Kelly got me through a divorce and helped me launch a new life.  Mojo was our faithful  pal during a new marriage.  Now Ginger loves my grandchildren and keeps me young with laughter.

Until the movie, I never thought about the purpose and how perfectly suited each one was to my needs at the time.

In 2010, Cameron’s book had just hit the New York Times bestseller list and I interviewed him. (https://vimeo.com/19325642)  The idea and book plot came to him like a spiritual channeling during a 1-1/2 hour car trip with his wife, Cathryn Michon.  It started with this premise.  “What is a dog’s purpose?  It’s to be with us. That’s what they were born to do and they are never truly happy unless they are with us,” he said.

From that spark came another thought, what if a dog never dies, but comes back through many lives? Cameron recalled that during that car ride, “This book idea unfolded as one thought, in all its amazing complexity.”

The movie champions pro-rescue as the character dogs are chosen from animal shelters or rescued as strays.  A manipulated video went viral accusing false allegations of animal abuse during the filming, which proved to be untrue.  Producers, actors, writers and others viewed hours of unedited raw footage, proving that no dogs were harmed during the movie, as certified by the Humane Society in the credits.

During these dark and contentious times, A Dog’s Purpose affirms the great goodness of (wo)man’s best friend.