Goldilocks and the three mosques 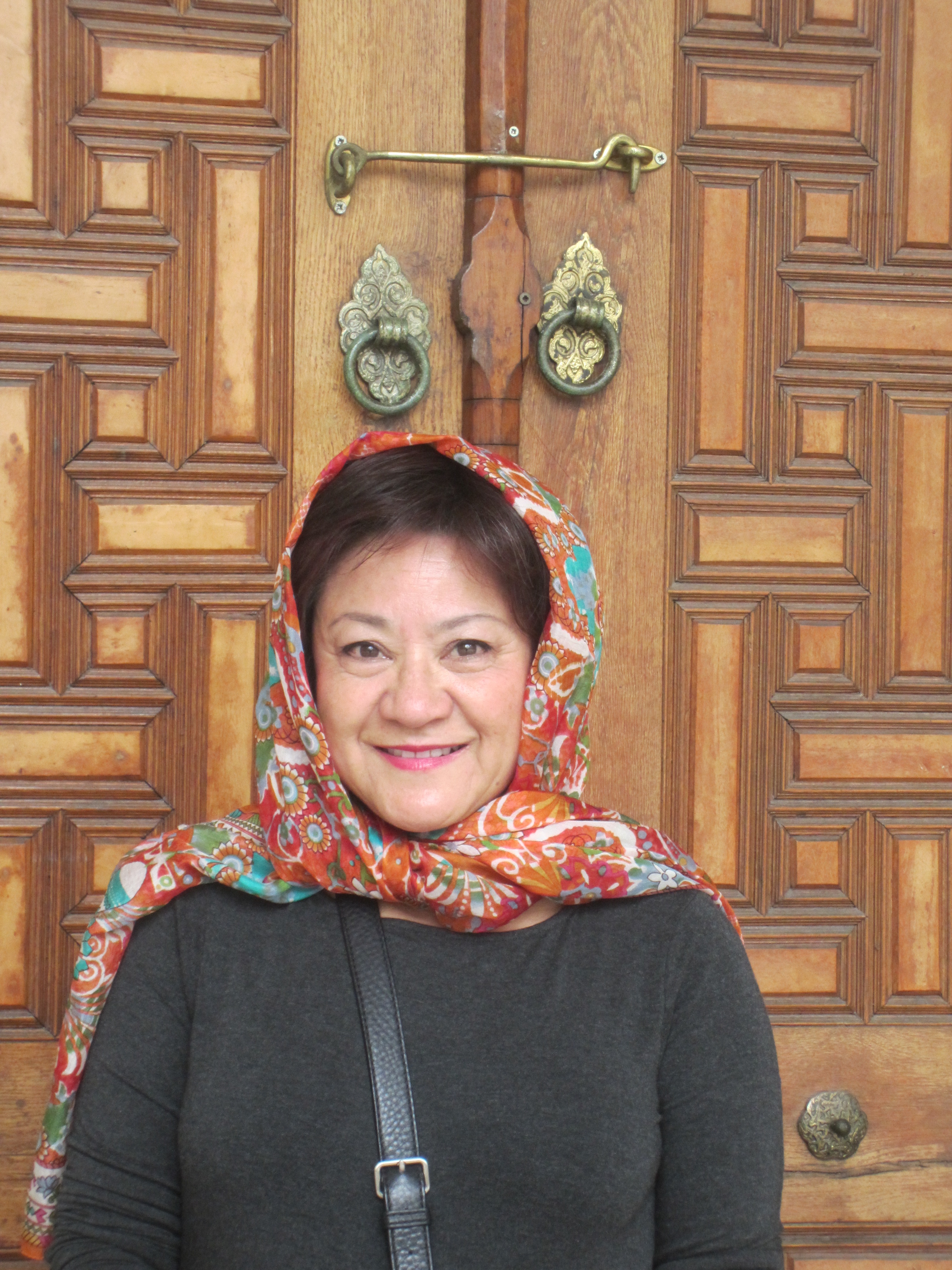 October 11, 2015.  On Sunday we had a free day to hike the historic neighborhood of Sultanahmet, and had a chance to visit three mosques. Being in a holy place on Sunday felt right, even if Christian churches are scarce. Much like Goldilocks with the three bears, we sampled small, medium and large mosques, and I’d say the large one was just right.

Turkey’s Muslim population is mainly secular, meaning they are modern, accepting and value personal individuality. I was surprised to find that non-Muslims are welcome to visit a working mosque. That is not the case in stricter Muslim countries, and perhaps not even in the U.S. (I haven’t tried, but maybe I should).

Before entering, everyone must remove their shoes and store them on a shelf (Really?  Leave my Coach boots behind?).  For women, head scarves and modest dress are a must, long skirts preferred. Sometimes a clothes rack might offer long dresses (akin to sad, graduation gowns) and scarves to borrow. But Turkey is tolerant, and many women (like me) enter wearing long pants.  Men and women should enter through separate doors and sit in separate sections.  Generally, men sit within the splendor of the mosque and women sit, often unseen, on the sidelines.

So while exploring the Sultanahmet area in Istanbul, we, like Goldilocks, came across three mosques.

Small mosque (I forget the five syllable name): It was a small building, richly carpeted that divided into two sections for men and women.  The women’s section appeared to be a carpeted room by itself. A lone woman huddled in the corner with prayer beads, troubled at my sudden appearance in a bright orange and turquoise scarf (too much perhaps?) She relaxed when I knelt down to meditate.  Did a nearby closed door lead to the main area? She became alarmed when I rattled the doorknob.  Oops, locked.  I didn’t stay long.

Medium mosque, The Sehzade Camil: Take “medium” with a grain of salt, it’s huge, but not as mammoth as other mosques.  It was built in 1543 by Ottoman Sultan Suleyman the Magnificent to honor his favorite son, Sehzade Mehmed, who died an untimely death returning victorious from war in Hungary.  The interior of the mosque is light, airy and spacious  with intricate designs on the domed ceilings and walls. I walked in with David through the main door and many men were praying.  Oops again.  I scurried over to women’s side. Good thing I enjoyed a full view of the marvelous interior because the woman’s section was partitioned off with a high front screen, preventing a full view of the room (and correspondingly, of us).   After a meditation,  I got up to peek through the side gap of the screen. Like a fugitive I’d jump from view if I thought somebody saw me.  I didn’t stay long. 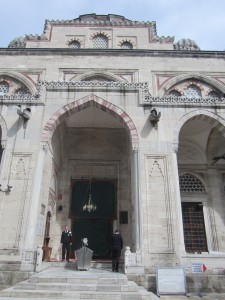 The biggest mosque in Istanbul, The Suleymaniye :  It was built in 1558 by Sultan Suleyman The Magnificent.  It is a masterpiece of Islamic and Byzantine architectural and design. Ethereal interior with rich orange carpeting, soaring domed ceilings, geometric designs alive with patterns and calligraphy and aglow with circular ceiling lights. (I posted a video clip on Facebook.)  People were praying, there was a sing-song of Koranic passages and chanting. The experience felt wholesome and welcoming. 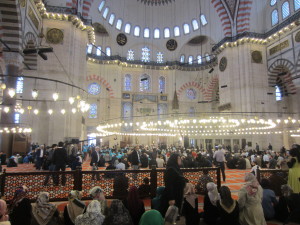 For one thing, all non-Muslim visitors, men AND women  together could remain at the back of the mosque and observe or join the worship separated by a only low railing between us and the congregation. I found myself praying, grateful to be part of a group energy that worshipped God.  They say Mohammed, I say Jesus,  but we all bow before an unfathomable, all-powerful God who surely must turn his face to this kind of beauty.  Now this mosque was just right!

Our free day found us walking and talking from 11 a.m. to 6 p.m. often punctuated with “Whoa, dude!” upon discovering ancient walls, monuments, or historic sites that trace back to 430 A.D.  We ate sea bass high above the Bosphorus River busy with ferries, fishing boats, and trawlers that journeyed to and from the Marmara Sea.  Much later, we returned to our hotel.  Oh, my achin’ feet.