Istanbul’s Grand Bazaar: Where are the women?

The Grand Bazaar in Istanbul, Turkey is the size of four soccer fields, a shopper’s Nirvana packed to its mosaic rafters with pashminas, pottery, exotic lanterns, evil eye keychains, and rugs, rugs, rugs. Every day about 250,000 shoppers teem through its corridors and tunnels.  While there, the lack of female salespeople surprised me.

The beginnings of the Grand Bazaar date back to the Ottoman Empire in 1455 and took its final form in the 17th century, according to our Turkish guide and walking encyclopedia, Cihan. 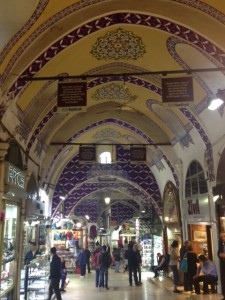 Inside the Grand Bazaar 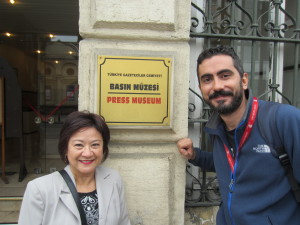 Suzette and Cihan much later at the Press Museum in Istanbul

I enjoyed Cihan even more than the kaleidoscope of goods. Native born, he is 30, a passionate secularist, proud of modern Turkey and critical of religious intolerance. Being with him made David and I feel protected since the crowds and endless warrens felt overwhelming.

Within the labyrinths, male vendors hawked from all sides,  “Over here!”  “What color do you like?”  “Please come see!”  Haggling is expected. Intimidated, I bought nothing.

Instead I asked our guide, “Why aren’t women selling things?”

Cihan said, “Well, it’s always men, and they can be coarse. They swear and they feel more comfortable with each other, so it’s not a nice place for a woman.”

I replied, “Cihan, you surprise me. You’re always banging the drum about modern Turkey. So what do men prefer? Swearing at each other or making more money?  Look around, the majority of shoppers are women.  I, for one, prefer to talk to a woman about gifts or things for my home.”

Cihan said, “No, you’re wrong.  Men are better at sales.”

I shrugged, “They’re more aggressive, I’ll give you that. Besides, how would you know men are better?  There’s no basis for comparison.”

He was quiet for a long time.  “You give me something to think about.  No one has ever said that before. Now I’m looking around and maybe you’re right.” 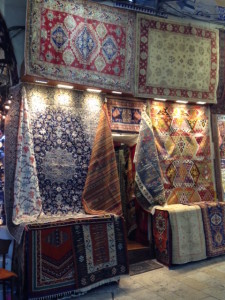 As we edged through the enormous marketplace, I knew he wanted to prove me wrong.  Finally, Cihan pointed to a shop, “Look, there’s a woman clerk.”

Further away, a fancy storefront sold scarves by Hermes and other ridiculously pricey brands, and he said,  “They have women sales people.”

I said, “My point exactly. Selling super expensive merchandise is best done by a woman. They’re no fools.”

He furrowed his brow.

The Grand Bazaar is a psychedelic explosion of goods, a fantastical emporium of 3,000 shops, both awe-inspiring and exhausting. It proved new for all of us.

Cihan said, “I will think about what you said. I see things differently now. But let’s go to the Spice Bazaar.  It’s the second biggest attraction after this place.”

I said, “What? Another one? I need a Turkish coffee.”