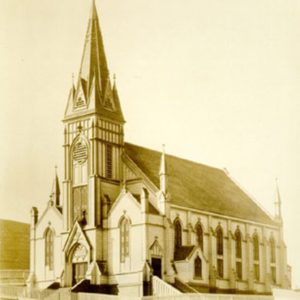 When all the shouting’s done, humble goodness shines forever.  Temporary power and posturing are empty calories that disappear. But quiet strength continues to nourish decades later.  I remember Mercedes, an old woman whose last name I never knew.  As a child I found her very scary at first.

My parents came from the Philippines. They left behind the familiar and everyone beloved on a wing and prayer for a better life.  They lived with hardship getting started in the U.S.

I was born here, and at six years old, I went to daily Mass at All Hallows Church with my mother where I’d sit and watch Mercedes.

She was Mexican and looked ancient, her face deeply creased. Wearing a silky bandana and a frayed sweater, she sat nearby.  In the colored light of a stained glass window, she rocked back and forth with a rosary in hand.  Every morning I stared at her as her lips moved non-stop in silent prayer. She had few teeth. I shouldn’t say “silent prayer” because she whispered in a low hum of Spanish.

My mother was drawn to her. Looking back, perhaps Josefina (Americanized to “Josie”) needed a prayer warrior.  After Mass, they would talk together in Spanish, and one day Mercedes invited us to her home.

At six years old, I was against it.  She looked weird.  I didn’t understand her language.  Was she the witch in Hansel and Gretel and were we headed for an oven?

We walked the many blocks to Mercedes’ home in San Francisco, where I feared a spooky, cluttered witch’s cottage. But we entered a spare living room with 12 folding chairs on a gleaming wooden floor. Apparently, prayer meetings were her lifestyle.  A huge velvet painting of The Last Supper covered the entire wall.  Even as a first-grader, I thought, “Tacky.” 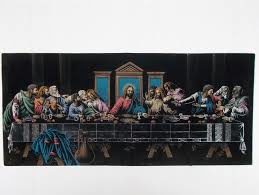 I sat there as my mother poured out her problems to Mercedes, who held both her hands, whispering back gently.  I did not understand the Spanish they spoke, but I sensed the pent-up emotion my mother released to this stranger.  Looking back, my immigrant mother rarely socialized and did not work outside our home.  My hardworking father was not a talker, and what advice could three kids under the age of six offer?

Mercedes’ reassurance held no agenda, no need for recognition or payback. She just offered kindness when it was needed most. Suddenly, her energy made Mercedes beautiful to me.  I could tell when the conversation ended and the praying began.  Mercedes had certitude in God’s grace and purpose. There’s hope. Don’t give up.  Hang on even through desperate times. Stay with him and he’ll stay with you.

I know because my mother repeated this to me for years afterwards.  My parents never became rich or even comfortable, but their prayer to see their children succeed was granted.  Sometimes the quiet intervention of a good person has greater influence, even years later, than the temporarily powerful who exhort and posture for personal gain.