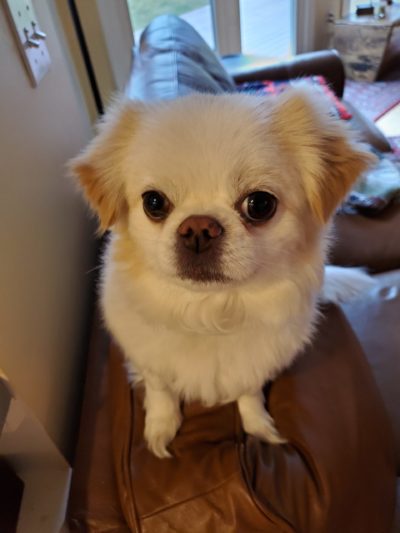 National Love your Pet Day is February 20.  Whenever I hear the rant-filled bullying of our public discourse, why doesn’t my dog Ginger wear a bright red vest emblazoned “THERAPY DOG”?  During the vicious storms of division, where’s MY thunder coat? Ginger is my teacup in the tempest.

That dog makes me laugh despite my being weary and discouraged. Scampering full tilt into the room to greet me, she nearly slams into a table leg as she rounds the bend.  Or jumping onto the sofa with a very loud woo-woo-woo! that translates to “And where have you been, Missy?” or “Fill my bowl now!” Often she gently settles onto my chest, acting like a magnet drawing out emotional toxins.

When I owned a home in 1984, my first dog was a wolf hybrid named Juneau, later followed by a Gordon Setter, a Beagle, and now Ginger, a Maltese mix presiding as high priestess.  They keep getting smaller.

I can’t live without a dog, and others would say the same for their cats, birds, gerbils, ferrets, or snakes; living beings we care for and love.  But all the while, make no mistake, they are saving us.

In the biblical story, “The Rich Man and Lazarus,” dogs offered comfort. “At his gate was laid a beggar named Lazarus, covered with sores and longing to eat what fell from the rich man’s table. Even the dogs came and licked his sores. (Luke 16: 19:21)

Today science shows having a pet reduces stress.  No pills needed, I just stroke my little dog, or get moving. “Let’s go for a walk, Ginger!” Dog owners are 31% less likely to die from a heart attack or stroke than non-owners, according to a 2019 study by the American Heart Association. Also, heart attack survivors who live alone had a 33% reduced risk of death if they owned a dog, while survivors who lived with someone else (a partner or child) had a 15% reduced risk. Maybe it’s because pet communication is low maintenance or at the very least, quiet but adoring?

Currently, I am heartbroken at the breakdown of civility and compassion. We have free will, different experiences and gifts. Yet labels carry the day, reducing others to political parties, racial stereotypes, or myriad forms of “otherness.” 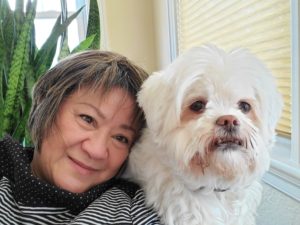 Therefore, I look for “the dog” in other people; those who are accepting, open, and fun.  What you seek, you will find.

(Photo of me with Reesey, my daughter’s dog.)

Be choosy like Ginger. For some she will allow their petting (and fawning praise).  For others, Ginger steers clear until they leave.  It’s not murder she fears, but maybe overhandling or roughness she’d rather avoid. (Neediness remains irksome even between species.)

Point taken, Ginger, I’ll save my energy for positive reciprocity.  On February 20, we celebrate pets, our loving lifesavers.

This column ran through GateHouse Media on 2/10/2020 and through The Patriot Ledger.