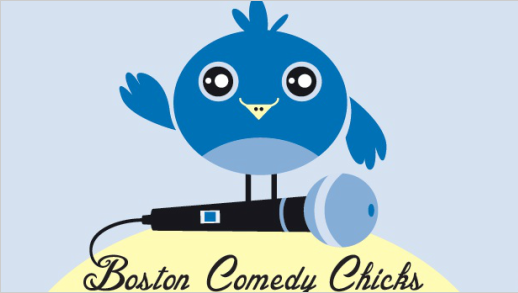 “So,”  you might ask, “how was your standup comedy debut?”

Scary.  Exhilarating.  Strangely addictive.  On April 19, I performed with 11 other Boston Comedy  Chicks at Doyle’s Pub in Jamaica Plain, MA; my first time telling my funny carjacking story to a paying audience.

Five minutes at the mic lopped five years off my life span.  How do comics do long sets without cheat notes written all over their hands? But what would my sleeve of scribbles say about about me?  Amateur! (You got that right).

Previously, I went to a comedy workshop led by Kathe Farris of Boston Comedy Chicks to prepare for my debut. After three hours, I had whittled my seven-minute carjacking story into four.  In comedy, it’s all about get-to-the-funny-point.  At the workshop, professional comedians tried out their bits, and the air zinged with hilarity, fast and furious.  I felt like Old Bess bringing up the rear.  Yet everyone was so kind and encouraging.

At the actual show, the room was full, and my husband and daughter were there, smart phones set on “video.”  So many friends came. What if I bombed? This secret thought brought me comfort, “I’ll pay you all back your $10 admission.”

Right before I went on, I went over every word, every paragraph beginning.  What if I left out some key piece to my carjacking story?

Then I told myself, “Oh, for crying out loud.  Give it a rest!  How can you forget?  You were there, remember?”

At the start of my story, there seemed to be silence. Then there was laughter and I sailed through it, remembering all the “bits.”  (Later my daughter told me people were shocked at first that it was a true story.)

Afterwards my daughter said, “Mom, you were just like a real comic up there!”  A woman with a local TV  show invited to perform, and another woman who has a comedy club in New Hampshire asked me to come up.  This thought brought me comfort: I don’t have to refund anyone’s ticket!

I NEVER thought I could be capable of doing standup. I’m in awe of those who get on stage, buck naked (metaphorically) and let it rip.  The Boston Comedy Chicks created a Heckle-Free Zone, and made it possible to get brave.   I just might have another routine in me…