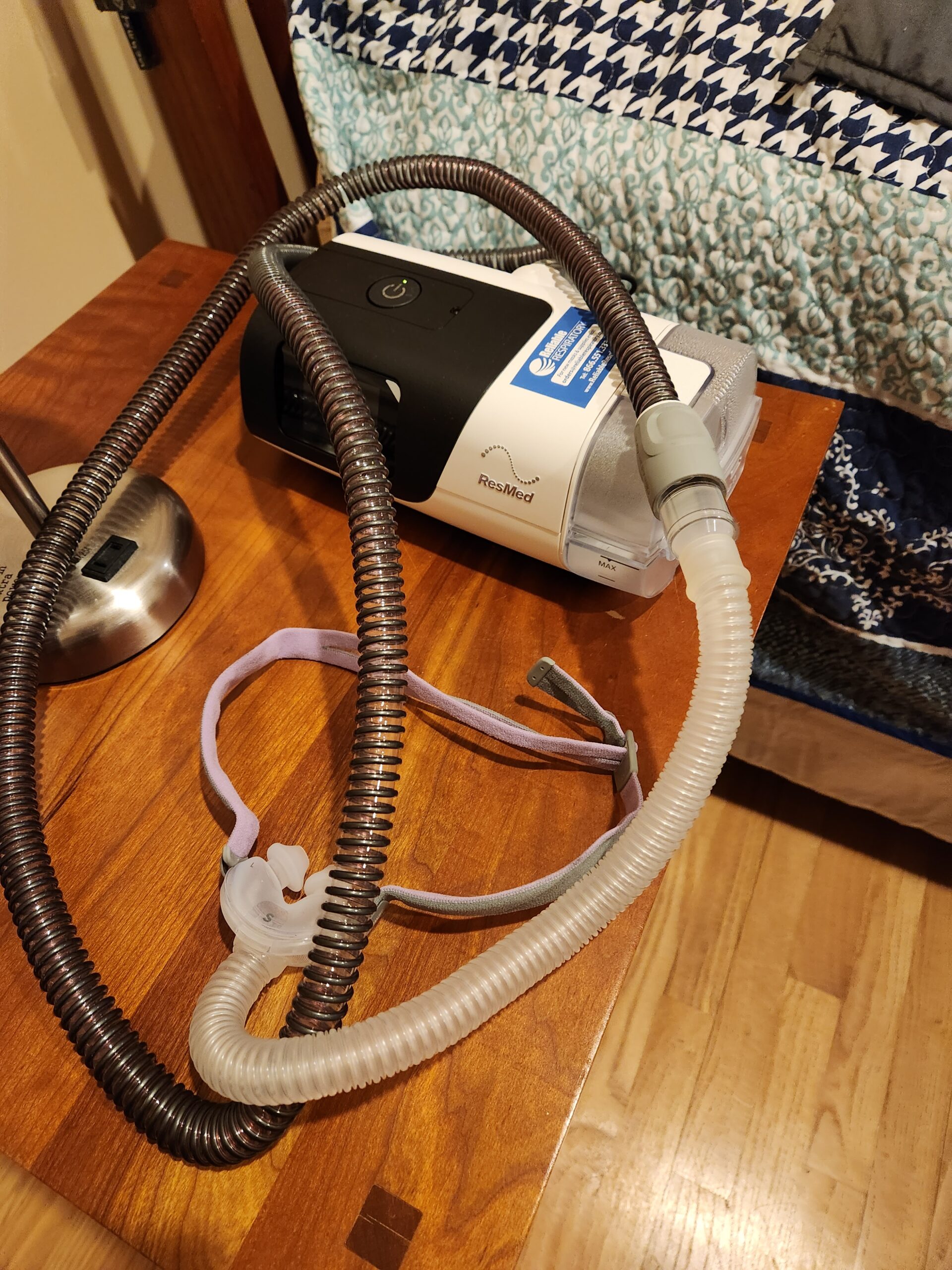 Vanity brought me to the discovery that I have severe sleep apnea.  I always assumed I had a hyperactive mind and insane insomnia, and I never got more than six hours of sleep a night. But sleep apnea?

Then I ran into an energetic friend, older than me, who looked so rested and years younger.  Of course, I said, “What skincare are you using now?”  She had been diagnosed with sleep apnea and is now sleeping eight hours a night.  I thought, “I gotta get me some of that!”

But seriously, could sleep apnea be my problem, really?  I toss, and turn, and snore, and my my mind is like a gerbil set afire in a bathtub.  Could a CPAP machine cure this?  At age 68, I do feel the lack of sleep makes me feel and look more tired, and horrors! It’s causing deeper lines around my eyes. And of course, there are all sorts of studies that show a lack of sleep can cause heart failure and related issues.  OK! OK! I’ll take a test.

In a nutshell, you take a testing monitor home for one night and it records your sleep patterns. You return the monitor, later you get a diagnosis, and if sleep apnea is the problem, a prescription gets you a CPAP machine.  If you’re on Medicare and other insurance, the entire cost may be covered!

So I have “severe sleep apnea,” and I was lucky enough to get a CPAP machine last Thursday (Jan. 5.) The first thing I thought when I saw the machine was, “Remind me to vacuum my car.”

My advisor, Hansel, took me through the whole operating procedure before I brought the machine home.

I know what you’re thinking.

How did he get the name Hansel?  Right?  I expected a tall Nordic man, but it turns out Hansel is from Nicaragua.  The story: his mother and aunt (who had a daughter) were pregnant at the same time. Another relative thought it would be so sweet if they were named Hansel and Gretel. (She’s the witch, I thought.)

I can relate.  People who hear my name (Suzette) expect me to be French.  No, my mother saw a movie, “This Love of Ours,” starring Merle Oberon and a character was named Suzette.  I came this close to being named “Celestine.”

Anywho, back to my first night with the CPAP.  As is typical, I did not read the directions, but just relied on Hansel’s instructions.

My biggest concern was how my husband would react with that thing on my face. I did NOT want him to see me. (I know, vanity, but I’m just keepin’ it real.)   So when he came to bed, I put the sheet over my head.

I peeked out from the sheet, that strap over my head, the nose plugs, the giant hose hooked up to the vacuum cleaner on the bedside table.

I pulled the sheet back over my head.  “Please shut up and turn off the light.”

First night: I don’t know if I ever fell asleep, I was so hyper aware of it.  It was not uncomfortable but different.  However, in the morning, I did observe that I did not toss and turn, that my mind had been devoid of urgent thoughts and reminders.  I definitely did not snore, and because it wasn’t easy to talk, it prevented me from waking David up with, “Hey, guess what?  I just had a dream” or “Hey, wasn’t that a good meal tonight?” or “David, did I tell you about…”  All this when he’s dead asleep.  (But he goes back to sleep so easily and never gets mad, so he’s the enabler!).

Second night:  I read through the instructions, and discovered that each nose plug has a Left and Right nostril designation.  I think I had them in wrong the night before, which might account for the slight dryness in my nose.  I went to bed at 9:30 p.m. (My typical sleeping hour is 12:30 a.m.) and I woke up once, and went back to sleep until 8:15 a.m.  UNHEARD OF!

I do feel better this morning.  I rushed to the bathroom mirror to see if the lines around my eyes were not as deep.  Hold your judgment. I should be more concerned about cardiac damage, etc. but I’m not.  The medical condition that brought me to this place is Hag Diminishment.  Hahaha!

I do feel more energetic and focused.  People, get a sleep apnea diagnosis!