Trees talk to each other and now I’m listening 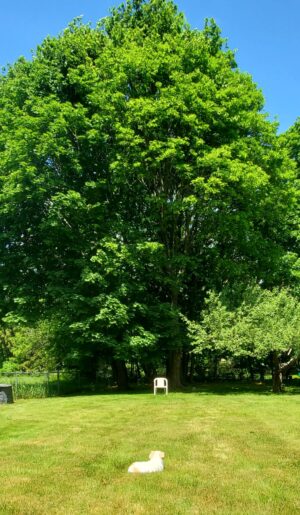 A 75-foot oak in my backyard impresses me with its intelligence. Trees protect and interact with each other more than I knew. Trees in my yard and the adjacent back field form a community that “talks” to each other.

These trees may date back at least 100 years when a larger tract of 10 acres was purchased in 1920 by Bertha and Samuel Shoolman who operated the first kosher dairy farm in Milton.

Ever since 2000 when we moved in, the old trees stood like kindly sentinels, their leaves a scalloped outline against rose and lavender sunsets. I imagine turkeys flying up into their branches for evening safety. The sound of resident owls mark the midnight hour.

I took trees for granted, never paying attention when lots were clearcut for new homes, or when trees were felled “for causing such a mess” with their leaves.

Trees have relationships with each other. Radioactive isotopes of carbon were used to measure interaction among trees by Dr. Suzanne Simard, an ecologist with the University of British Columbia.

I read The Overstory by Richard Powers, where a fictional character, Dr. Patricia Westerford, did such experiments proving that trees “talk” to each other.  I thought, Is this based on a real person and actual research?

It was, and now people are paying attention to Dr. Simard and her long-time findings.

Tree roots can go hundreds of feet deeper and fan out longer than the tree’s height, and they serve as an underground provisional network to other trees. Dr. Simard called it “The Wood-Wide Web.”

Through a vast tangle of living organisms and microscopic filaments, stronger trees nourish weaker ones. Did you know birch trees can draw up hundreds of gallons of water, and share it with other birches and Douglas fir trees?

Studies show that when danger threatens, trees release pheromones through their leaves as distress signals to its neighbors. For example, such warnings cause trees to produce chemicals in their leaves to make them bitter tasting so animals or insects will munch elsewhere.

But clearcutting and the rapacious appetite for building goes unnoticed, and Dr. Simard warns that the destruction, especially of old trees or “Mother Trees,” signals a foreseeable end to forests.

In my backyard, an oak towers over a small chair at its base. Luckily, the adjacent field is protected open space by owners Marvin and Andrea Gordon, descendant relations to the original Shoolman family. The existing trees are safe, and I marvel at their height and girth.  So strong, so huge, but like many old trees elsewhere, they are oh-so-vulnerable to our folly.