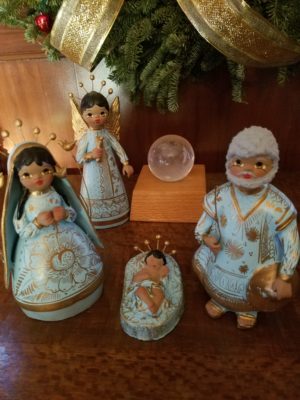 Merry Christmas! It’s a greeting that celebrates light in a too-dark world. For Christians, the heartbeat of Jesus Christ’s message is humility and service. “Merry Christmas” is about love triumphing against all odds.  Consider that the King of Kings was born among the poorest holding lineage with the most persecuted of people.

The Nativity story is rife with messy details.  Imagine Mary, huge with pregnancy, on the brink of giving birth in a strange town after long travels.  As a mother remembering my own daughter’s birth, I shudder to think of Mary’s fear late at night, cold and in desperate pain, taking shelter in an animal shed.  Finally, the newborn Jesus is placed in feeding trough.  Ick! How dirty was that? Christ was not attended by palace servants, but witnessed by shepherds even as angels swirled in song under the Star of Bethlehem, a documented astronomical phenomenon.

Christmas is a convergence of the miraculous with the meanest of circumstances.

God gives a big clue in the poverty of Jesus’s birth. To me it says heavenly favor rests with the poor, the oppressed, the downtrodden and with those who help them.  Some forms are obvious: charity, volunteerism, community activism, food and clothing drives.  Other ways go unacknowledged publicly, yet imprint the recipient with great hope, such as a listening ear, visiting the lonely and those in prison, showing up with a meal, or babysitting to give an overstressed friend a breather.

The richest, the smartest, or the most accomplished don’t have the advantage in God’s ultimate plan. Rather, Jesus’ birth and life highlight the human heart at its best, and we all need a God-like quality to get there.

The spirit of Christmas is anti-materialism. The gifts of the Wise Men were an act of worship to God’s son. Nowadays we worship stuff and non-stop shopping. Yet time is the greatest gift of all, and scarce in our go-go-go society.  “I can’t be there, so here’s a fully loaded gift card.”  Frankly, most would glady exchange presents for “presence.”

Patience is fast becoming even rarer.  Screaming back is a trending twist on strength, aggression as assertion. Yet the sovereign God of Christians role modeled humility, and it’s fair to state that believers share this with non-believers: we are all serious works-in-progress.

Jesus’s birth, life and triumph over death through his Resurrection offer a roadmap that reminds us that we start from nothing, that this world is not the final stop, and meanwhile, God guides us to be the best we can be.

Merry Christmas! It’s a phase that acknowledges the power of divine light in a dark world.  It’s a blessing bestowed.

This column ran nationally through GateHouse Media/More Content Now and through The Patriot Ledger.