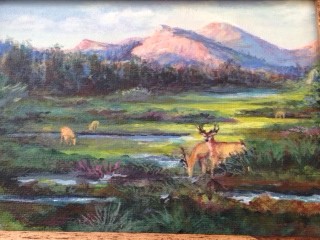 I opened the box, fresh from San Francisco, to see what my brother and sister-in-law had sent me for my birthday.  Organic barley tea and a painting done by Steve of a scene in Yosemite, which holds an eerie coincidence.

In the painting, four deer graze in a meadow and drink deeply from glistening streams.  The distance is bordered by tall trees, and beyond are mountains the color of rose quartz crystal.

Strange, but whenever I put myself into a meditative trance, I imagine this very place in Yosemite, where I had visited once in the 1980’s.

How could my brother know that? 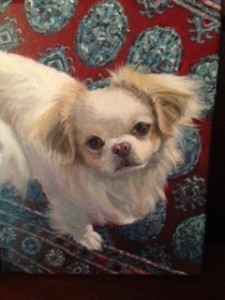 Yosemite is an unusual choice. How could he know this exact meadow is my go-to-place whenever I imagine a sacred spot for relaxation?

I called him at work.

After thanking him for his beautiful painting (and organic barley tea) I got right to the point.

“Why did you chose this scene?  Did you know I had been to Yosemite once?”

“No.  I was just looking through magazines for something to paint, and I liked the deer in it.”

I then shared the coincidental symbolism.

I asked him, “And the mountains, were they pink in the magazine?”

“Yeah, but I wanted to make them pop even more.”

“Steve, they are the exact color of rose quartz, the color of love and healing.”

After our call,  I stared at his painting for a long time. On the brink of turning 61,  I’m a woman who looks for signs.  For me, the message of his painting is “You’re safe within where love and healing reside.  So cool your jets.”

(PS:  The last sentence is a very good reminder after spending a morning at the Registry of Motor Vehicles, a place built for size not for speed. I had to renew my license where a positive mindset is hard to maintain. Cool your jets is a good mantra.)