Movie, The Shack answers how to get past unspeakable tragedy 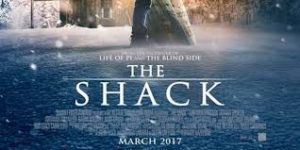 The age-old angry question is, “If there is a God, then why do horrible things happen?”  A new movie, The Shack, based on the book by William P. Young, goes further.  “How does one get past unspeakable tragedy and relentless pain?”  The Shack is a visual parable that answers both questions.

Mack Phillips (actor Sam Worthington) grew up under an abusive and religious father, so his faith is doubt-filled compared to his wife’s devotion to God whom Nan (Radha Mitchell) addresses easily as “Papa.”  The grief from the murder of Missy, their young daughter, tears the family apart.  Now Mack’s relationship with God is filled only with rage and blame.

A cryptic note compels Mack to the wilderness shack where the bloody clothes of his daughter were found though her body was never recovered.  There he encounters God in the form of the Holy Trinity, “Pappa” (Olivia Spencer ), Jesus (Avraham Aviv Alush) and the Holy Spirit (Sumire Matasubara).

God is blasted with bitterness and accusations by Mack. Everyday life often cries out,  “Why didn’t you stop this?”  “If God is love, then why is there war and murder?” “Why do innocent people suffer?”

If ever a “God” were more suited for the movies, it is actor Octavia Spencer, luminous with love, patience and understanding. And that’s another thing, how can “God the Father” be a woman?  “Pappa” explains that because of Mack’s abusive father, it was wiser not to appear to him as a man.

That took me aback.  Maybe God does approach us in more readily acceptable forms. Genius. For example, I can’t imagine “God the Father” as cuddly and ever-involved because my own dad was not. Instead, it’s easier for me to connect to God through nature. He appears as passing clouds and unexpected heart rocks on the beach.  I get it.

Mack accuses God of abandonment when his daughter needed help the most, but “Pappa” was present with his daughter the entire time. People use free will and make choices with horrific consequences, but such decisions are not God’s fault or of his making. Instead God provides those things we cannot manufacture on our own: courage, forgiveness, peace, and healing.

The dialogue is simple, but surprisingly insightful. When Mack dismisses God’s ability to heal, “Pappa” tells him, ‘You are looking at me through the keyhole of your pain.”  Mack’s viewpoint is  a tiny window that sees only regrets. A much bigger picture is not in focus.  A spiritual heart needs to open to the possibilities, which are revealed to Mack through an encounter with Wisdom. The film moves to conclusion with surprising twists both in plot and points of enlightenment.  I won’t be a spoiler.

The Shack is not a literal interpretation of Christiantity.  Rather, it is a parable of hope and redemption, which says,“You can’t do it alone. You need God’s help.”    S/he who has ears, let them hear.

This column ran in The Patriot Ledger on 3/18/2017 and nationally through GateHouse Media.