Spirit Message at a Sandwich Shop 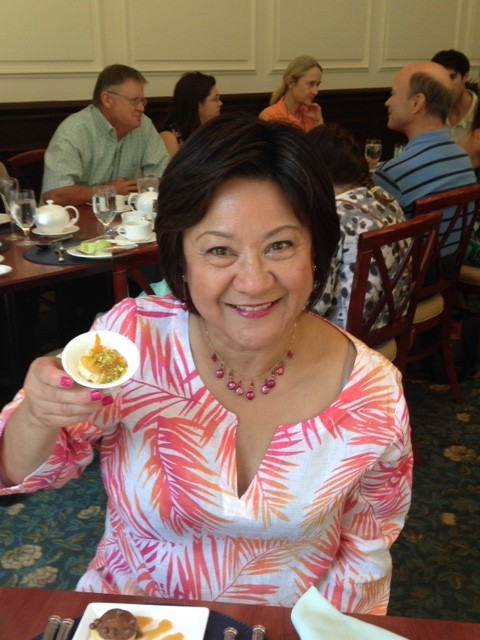 Today I gave a young man a spirit message from his dead mother.  I know, weird.  I’m not a small medium at large. I’m not a psychic.  It just happened.

There I was, waiting for my sandwich-soup combo, and the 20-something-year-old behind the counter was about to hand me my food.  Then he paused and looked at me like I was a ghost.

“Are you Filipino?” he asked.

“I can’t believe it.  You look just like my mother.  I had to do a double-take! You look exactly like her.”

“Well, I’ll take that as a compliment,” I said.

“It is, but she passed away two years ago.”

My own mother passed away in 1987, and years later, I spotted a woman on the street who looked like her, walked like her and even wore the same fake fur hat my mom would occasionally wear.  My heart caught in my throat and I wanted to run after that stranger in the street and touch her.

At Au Bon Pain, I wondered how that young man must feel to “see” his mother again. Before I could even tuck into my chicken noodle soup, I said this prayer, “Dear God, wouldn’t it be nice if he could get a message from his mother?  Is there something I could tell him?”

Now this is not typical.  I am SO not the Long Island Medium.  Maybe it was the longing in his eyes when he stared at me.  Or maybe I can’t leave things alone.  As my sister once said, “You always have to get involved!”

Suddenly, in my mind, I saw a dress with vivid red flowers, a vibrant pattern, big blooms.  Now why did I think of that?  Should I ask him about it, and then take it as proof of a message to give him?  I felt hesitation, doubt.

Then I felt the wash of a mother’s love come over me.  His mother. Surely that would be a welcome message from her spirit.  Yet I started to question back in prayer, “Am I supposed to walk over to the sandwich counter and talk to him while people are in line listening?  He’ll think I’m a kook. Maybe this is a bad idea.”

Just then he walked right past my table, another sign.

I said, “Excuse me. This is embarrassing, but I have to ask.  Did your mother have a favorite dress with bright red flowers?”

He said, “She did. She was buried in it.  It had big red roses up and down the dress.”

I said, “Well, I was praying just now and God is allowing her spirit to give you a message.  She’s very, very proud of you.  She loves you so much. You’re about to make a big change.  Are you thinking of moving away or changing jobs soon?”

His eyes got big.  “I have a new job interview this afternoon.”

“Well, whatever happens, she’s very proud of you, and she wants you to turn to God.  Pray to him for help. Go to God.”

He stared at me, silent.  “That is exactly what my mother would have said.  She was so religious, but I wasn’t, not really.  But that’s OK because she never forced religion on me, but she always said to us, ‘Go to God for all your problems.”

I felt a wave of happiness and relief, looking up at him, my soup now a little cold.

And on behalf of his mother, I did.

I finished my lunch, feeling a sense of wonder for the rest of my day.

Have you ever received or given a message that felt like it came straight off a divine teleprompter?