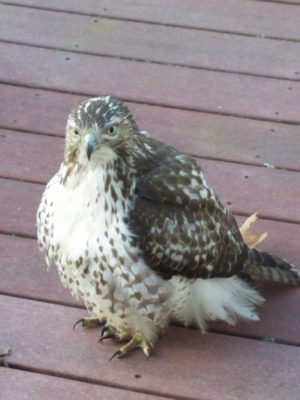 (Photo by Suzette Standring.  Hawk with a concussion right after its crash)

Watching wildlife is a year-round Christmas gift as they scamper, trot, glide, and even slither freely nearby.  Our fenced-in back yard abuts an open field where coyotes, turkeys and deer are common.  Occasionally, the wild jolts the urban, as when a magnificent hawk bashed against our patio window.  The “BOOM!” sounded like a  sledgehammer against a wall.

My husband and I ran onto the deck and found a hawk on its back, out cold, its legs sticking up into the air.  (Maybe it was trying to land on our Christmas tree on the other side of the glass.)

In moments, the bird righted itself into a dazed ball of feathered fluff.  It shook itself, a concussed look of “What the hey…” and sat there blinking at us. From two feet away, I cooed, “You’re going to be OK, little buddy.”

As its eyes cleared, we thought it best to move back inside.  After all, it’s a predator, not a pigeon.  After ten minutes, the hawk flapped its wings and took off.  “Fly away, beautiful creature!”

Being so close to a wild hawk for that long was a marvel.

i’m not a country girl.  I was born and raised in San Francisco, where most birds were brown sparrows or pigeons.  It wasn’t until I moved to New England that I delighted in cardinals, bluebirds, and orioles. I was dumbfounded by hawks. The first time I saw a deer, I was jumping up and down with excitement. It might as well have been a gorilla!

In Milton, nearby open space gives me a closer acquaintance with God’s creatures.

Sometimes a coyote sits in a patch of sun like a big dog.  If I move toward the fence, it runs away, so I have to be content to stay on my deck, oohing and aahing through binoculars.

But I no longer share my coyote sightings with others.  Their predictable reactions are fear, or stories about pet killings, and other cautionary tales.

I don’t discount what they say, but I wonder what prevents them from appreciating beauty for beauty’s sake, and just leaving it at that. Why react with instant negativity?  Why brand them only as pests and predators?

I am drawn to Native American attunement to Mother Earth. To me, animal sightings always have been undeserved moments of grace, appearing out of nowhere, and then gone.  Animals are symbolic totems and messengers. For example, deer represent gentleness, a trait I could attempt to manifest more often. The coyote is considered to be the trickster, a clown.  Perhaps it’s a reminder to lighten up.  Hawks symbolize courage, focus, and protection from danger, (but I’m not sure how that translates when one bashed into my window.)