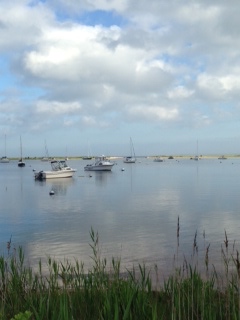 Centuries before the science of positive thinking, the apostle Paul wrote this in 62 A.D., “Finally, brothers and sisters, whatever is true, whatever is noble, whatever is right, whatever is pure, whatever is lovely, whatever is admirable—if anything is excellent or praiseworthy—think about such things. Whatever you have learned or received or heard from me, or seen in me—put it into practice. And the God of peace will be with you.” (Philippians 4:8).

In ancient Rome, Paul wrote this while in prison. Nero Claudius Caesar was emperor, known for an insane blood thirstiness, cruelty at whim, and debauchery.  When Rome burned, the public believed Nero caused it so he could create a more glorious city. Nero then made innocent Christians the scapegoats, and Paul was arrested during this persecution when hundreds were killed and tortured as sport.

Yet Paul exhorted others to stay focused on whatever is true, noble, right, pure, lovely, admirable, excellent and praiseworthy.  In the end, Paul prevailed at trial.  The purpose of his suffering was to bear witness to God’s hope under circumstances that would bring most to bitterness and despair.  Faith saw him through.

In comparison to Paul’s ordeal, my struggles are minor. Yet I believe in the power of prayer and a positive mindset. It doesn’t take much for my thoughts to veer into a bad neighborhood. I can go from pleasant memories to imagining dire circumstances in seconds flat.

As Paul wrote about his own positive example, “Put it into practice,” and so I reintroduced affirmations into my life.

Research shows that an affirming mindset can relieve stress, improve performance, and can aid perseverance. That is not to say that such willingness alone can overcome all hardship. However, prayer and positivity is a double dose of coping and comfort.

I soon became aware of when my thoughts began to sour; “this isn’t going to work” or “this will take way too long” or “for sure, I’m going to get attitude.”  I then immediately replaced such thoughts with “I will have a great outcome,” or “effortlessly and easily, this gets done,” or “people want to help me.”  I’d shoot up a prayer, “If this what you want, then kick the doors down for me, because I can’t do it without you.”

Instead of expecting problems, I brought a happy anticipation. Call it coincidence, but my fresh mindset brought good results. People can sense good energy and this was confirmed by a gas station attendant.

Typically, I might secretly think, “Hurry up, I gotta get somewhere,” but my silent declaration to the attendant was “God bless you, My day goes smoothly.” Suddenly, the young man started washing my windshield.

I said, “Hey, thanks, nobody’s done that for me in a long time.”

He said, “You just feel like a nice person.”

It’s an energy thing, and “the God of peace” was definitely with me.