April celebrates Columnists Day: separating the good from the bad and the ugly 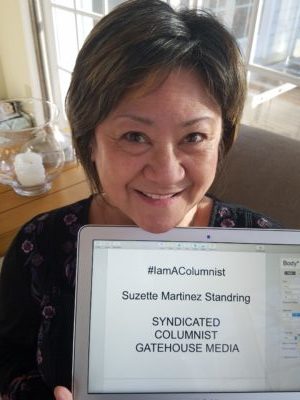 Being a columnist is all about relationships. April 18 celebrates Columnists Day, and its patron saint is Ernie Pyle, the famous World War II reporter whose front line stories made vivid and vulnerable the sacrifices of service men and women.  At its heart, memorable opinion writing humanizes events and struggles.

Whether a writer is liberal, conservative or somewhere in between, or whether the columnist writes about family, health, and general life, the job is to help readers understand the world around them with facts and intelligent reasoning. Add empathy, experience and understanding.  It’s about relationships.

In 2002, what Leonard Pitts, Jr., a Pulitzer Prize winning columnist, said, still applies in 2019, “Whatever your take is on a given topic, you should be able to explain how you got there. What reasoning or logic brought you to that conclusion. You should be able to defend your beliefs against opposing arguments, and if you find that you can’t, you should be obliged to reconsider.”

Today ranters and provocateurs dominate and divide society.  Extreme views carry the day and fool us into believing the chasm cannot be bridged.

Remember the days when Walter Cronkite gave the news as straight facts, and trusted columnists helped the public to form opinions based on intelligent reasoning? Oh, you’re probably too young.

Today the news is interwoven with speculation. Many commentators offer up what-if scenarios instead of solid opinions.  The public should demand separation of news and opinion just like the separation of church and state. For example, editors should stop asking their young reporters to blog, tweet, and otherwise offer a personal slant on the news they report.  Leave it to professional opinion writers.

More than ever, the public needs credible columnists, such as the likes of Clarence Page, Connie Schultz, Peggy Noonan, Maureen Dowd, George Will, and Leonard Pitts, Jr.   These writers have career longevity for a reason.  They speak to truth, not “truthiness.”

It’s about relationship. When you seek advice from your friends, do you turn to the drama kings and queens, or do you listen to those with wisdom, humor and maturity?

James Bennet, as the former Editor-in-Chief of The Atlantic, monetized that publication successfully.  Now he seeks to do the same as the Editorial Page Director for The New York Times, and columnists are part of his winning strategy.

It seems contrarian because many publications have let go of long-time columnists. But Bennet believes the public will pay to read their favorite writers.  At the JFK School of Government at Harvard, Bennet said, “Opinion drives engagement. Readers attach to a writer or to a topic.  It’s a model for subscribership but the journalism must be good.”

As a columnist, I don’t allow myself to get caught up with labels that have long become polluted.  I want a genuine relationship with my readers.  Therefore, I can only “do” me to the best of my ability, and countless other columnists believe the same. Celebrate Columnists Day and press your publication to bring back a favorite writer.  We all yearn for trusted relationships.

Suzette Standring is a past president of the National Society of Newspaper Columnists (www.columnists.com) and now serves as its Executive Director.

SUZETTE MARTINEZ STANDRING is a nationally syndicated columnist with GateHouse Media. Her two award winning books, The Art of Opinion Writing: Insider Secrets from Top Op-Ed Columnists (2014) and The Art of Column Writing (2008) are used in journalism courses such as Johns Hopkins University. Suzette is a past president of The National Society of Newspaper Columnists, and the host of It’s All Write With Suzette, a cable TV show about writing. Visit www.readsuzette.com or email suzmar@comcast.net