Philippines: A Visit to one of the Seven New Wonders of Nature 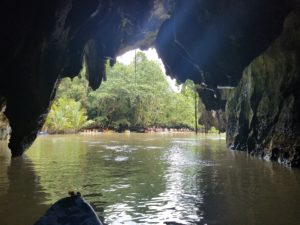 From Cebu, we flew to Palawan, where outrigger hopping to nearby unspoiled  beaches on other islands is easy. But when it comes to Eden, the island of Palawan is no slouch. 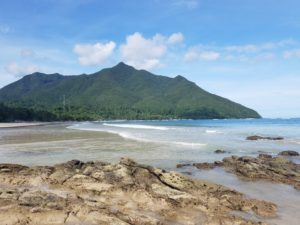 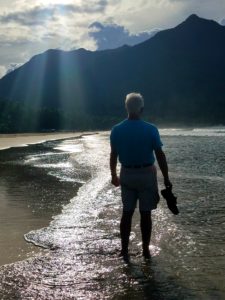 Here in Palawan, in 2012 the Puerto-Princesa Subterranean River National Park was ranked one of “The Seven New Wonders of Nature.” We’re set to explore its mammoth underground river ways and caves.

Now recalling my last descent to have a look-see at stalactites, I might be “caved out,” but David said, “Suze, you don’t want to miss it. It’s a UNESCO site. Besides we already paid for the tour.”

I asked our guide, “Do I have to climb up, shimmy down, or cross over anything to see this place?”

“No, ma’am. We take a ferryboat to the other side of Palawan, you get off, and then a paddleboat takes you through the caves.” 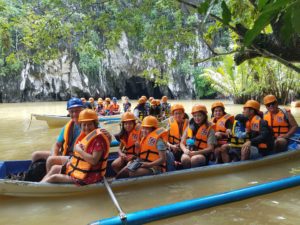 Also known as the Puerto-Princesa Underground River (PPUR), the area is protected as a national treasure, and wildlife abounds. There are over 150 species of birds. David videoed a four-foot Monitor Lizard gliding through the underbrush. 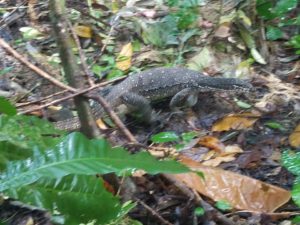 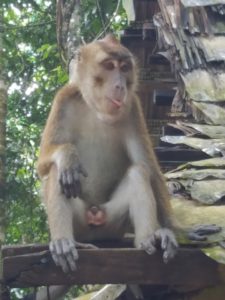 We saw a family of macaque monkeys near the restrooms. To protect the environment, only 600 tourists are allowed daily with required advance tickets. You can’t just show up, and it’s a long way to Palawan to be turned away.

As we board the paddleboats, we get audio-guides and hardhats. But the hardhats are not in case of falling stalactites.

They are for falling bat guano because the caves are full of bats. Wait, it rains bat poop in there? Why am I hearing this for the first time?

Then reassurance to the panicked paddle boaters. Bats sleep during the day. Very few will be flying around. The hardhats are just for added protection.

“However, never keep your mouth open. You don’t want anything…organic to fall into your mouth by accident,” said the guide.

“You mean I might swallow batshit just when I’m saying wow?”

“Not really, but the drips from the ceiling mixes with bat guano, and you don’t want that bacteria in your mouth.”

So off we glide toward the cave opening and into utter darkness with my hardhat pulled tightly and my mouth hermetically sealed. 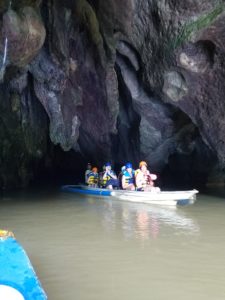 Our guide shines lights into the realm. Suddenly, we enter a mind-boggling cavern of fantastical shapes and gigantic overhead rock shards. He turns the light off for a nanosecond, and we are plunged into pitch blackness. Then his flashlight spotlights a wild sculpture gallery. The stalagmites and stalactites have names like The Giant Candle, The Mushroom, The Lion, The Last Supper, The Garlic Bulb (left photo) and The Holy Family (right photo). Our guide says it takes a year for rock formations to grow a hair’s breadth. 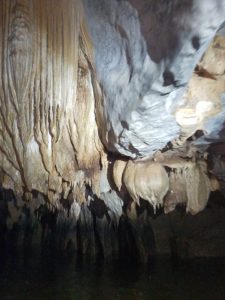 (Does it look like The Holy Family to you?) 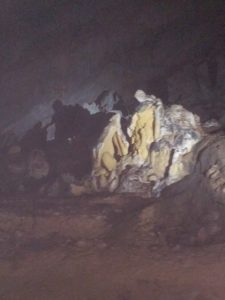 Bats? Many fluttered high above, using echolocation to avoid us, but hundreds more nested on the walls and ceilings, just waiting for dusk when the Dracula club will emerge in teeming numbers. Thank goodness, it’s only 10:00 a.m.

Captivated by magnificence, I bent my head way back to study above formations, and my hardhat fell into the water!

Luckily, a passenger rescued it, but now it was filled with BAT TOILET WATER. I shook my hat out but it was still wet. Wearing a “puke face” I put it back onto my head. UGH. Outside of the cave were pristine, blue, see-through waters. In here, a brown murky river. I had been so resolute in keeping my trap shut, that I never thought about bat waste seeping into my scalp. Stop thinking about it, Suzette. Stop thinking. Please stop thinking…

Be in the moment! The PPUR is wondrous, a limestone karst cathedral, cool, and dark naturally, awe-inspiring when lights beam, with only the squeaks of insomniac bats breaking the quiet.

The tour itself took 45 minutes and soon we re-emerged blinking into the bright tropical light.

It was so worth the advenure.

David said, “Do you want to hang out for a while?”

“No, I want to get back to the hotel and shampoo my hair 16 times.”

Back to the rigors of beaching. 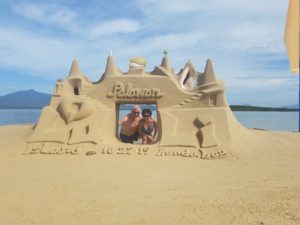