Easter: Nothing is impossible 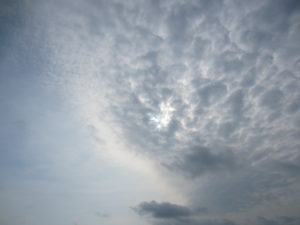 Easter.  As a kid, I imagined a wooden cross and golden sunlight piercing through purple clouds. I grew up jaded on words like “resurrection” and “redemption,” which felt as distant as lavender skies. Now I feel differently.

The good news of Christianity is that nothing is impossible with God.  For Christians, Jesus Christ’s resurrection is proof of God’s power, even over the permanency of death.  Soon many churches will reflect on a scripture from John 11:25, “Jesus said to her, “I am the resurrection and the life. The one who believes in me will live, even though they die.”

This may be hard if not impossible for many to grasp, but what is easy to understand is the concept of rebirth. Just as Christ came back from the dead, I can come back from that which deadens my soul and spirit; the things that hold me back from living fully.

Easter is about liberation because a direct door to God was opened. We walk through as new.

We all have barriers.  Maybe it’s being a slave to negativity.  Addiction.  Bad choices.  Unhealthy relationships. Enslavement to despair causes some to believe that suicide is the only way out. Holding money or success at the highest altar creates its own prison.  Then there are the horrors of human trafficking, violence, war, and situations that render a feeling of helplessness.  I can get resigned to mental bondage.

Easter is about freedom, a release from fear, and rebirth is transformative.  A mindset rooted in spiritual purpose could change the lives of millions. Or perhaps one tattered piece in the quilt of family connection can be mended. Be brave and use your gifts fully.

Erma Bombeck said it best, “When I stand before God at the end of my life, I would hope that I would not have a single bit of talent left, and could say, ‘I used everything you gave me’.” (Now there’s a woman whose faith propelled her forward.)

Sometimes the bars of insecurity lock me in and there I am, stuck. Maybe a project requires outsized effort and success is uncertain.  At times I don’t want to be forgiving or I don’t want to change, or frankly, I don’t think I can.  Then a teeny inner voice says, ‘Now if Christ can rise from the dead, surely you can do this.”

Faith is a lifeline that pulls me up from six feet under.

Easter does not celebrate the possibility, but rather, the certainty that nothing is impossible for God.