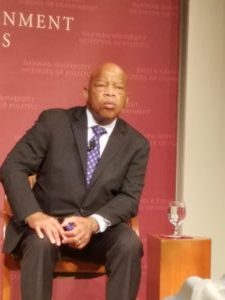 Our fractured society is discouraging, so take heart from Hon. John Lewis, the Georgia State Representative (5th District) who received the 2017 Gleitsman Citizen Activist Award at the Harvard Kennedy School of Government. Student Ivan Rahman asked, “Will you share a time in your activism when you felt really vulnerable – a time you don’t often talk about – and what did you learn from that experience?”

Bonds forged during divisive times and their sudden deaths tripled his grief. [After the March in Washington in 1964] “President Kennedy invited us down  to the White House and we stood in the Oval Office and he greeted each one of us and he kept saying, ‘You did a good job, you did a good job.  Do you have a dream?’  That was my last time seeing President Kennedy.

“When Martin Luther King, Jr. was assassinated, it was a very sad loss for me.   He was my hero.  I was campaigning for Bobby Kennedy when we heard that Dr. King had been assassinated. We heard about the shots and it was Bobby Kennedy who announced to the crowd that Dr. King had been assassinated.  Two months later I was campaigning for Robert Kennedy in  California and a few minutes before he was to make a prepared statement, he said, ‘John, wait, I will  return,’ and he never returned.

“That was a low point.  I think one of the reasons for me to get involved in politics, to run for office, is the desire, maybe, to pick up what Dr. King and Bobby Kennedy left behind. President Kennedy, Martin Luther King, Bobby Kennedy became my heroes. They inspired us, they gave us a sense of hope and optimism. I couldn’t stay down.  I had to get up.”

Non-violent protest is Lewis’s lifelong message, although he has persevered through brutal response. In 1961 he was one of the Freedom Riders who challenged segregated bus facilities.  In 1963, he was the youngest member of the “Big Six” leaders of the Civil Rights movement, then organizing the March to Washington with Dr. Martin Luther King, Jr.  Lewis recalled, “I was 23 years old and I had all my hair.”

Protesting repressive voting policies, Lewis and other marchers crossed the Edmund Pettus Bridge in Selma, Alabama in 1965. They were clubbed and gassed by police, and Lewis suffered a fractured skull.

He said, “I kept moving and then in the summer of 1966, there were people in my own organization, some people who said I was not Black enough. I was not relative enough.  I was not radical enough.”

Yet when many lost faith in peaceful protest and desired more aggressive action, Lewis said, “That’s not my style.”

Since 1981, he continues the fight through political office. In 2016 he launched a sit-in for gun control among House members in Georgia.  Over decades he’s been arrested and jailed at least 45 times.

In his view, love and non-violent protest are the best and most enduring courses of action.

“I’m still here. I’m still standing, trying to do my best, my way.”

This column ran in The Patriot Ledger and through GateHouse Media, 4/25/2017