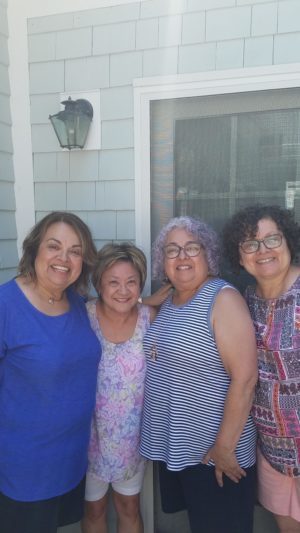 Patience is hard, especially when a problem rents headspace 24/7.  Others may talk about kids or personal passions, but no, somehow I want to insert my issue into every conversation.  I had to choke-chain myself when childhood friends came calling.  Could I be fully present sans drama?  Good friends enhance patience.

A year ago, I invited my California friends to Milton and Cape Cod. Although recent troubles were foremost in my mind, I vowed to create new, happy memories.  After all, it’s one thing to confide in close friends, but it’s another to ruin a vacation by turning it into a week-long, personal therapy session.

We grew up with money problems, and survived family dysfunctions and even a race riot in the Bayview/Hunters Point.  Yet rich were our good times. In 1964 Beatlemania broke out and the sisters were the first to wear black turtleneck dickies under their Catholic school blouses. We practiced new dances – the Frug, the Temptation Walk, The Shing-a-Ling – in the era of American Bandstand, The Lloyd Thaxton Show, and Hullabaloo.  Our “Ladybug Club” held an art show in their basement with hand-drawn pictures and PlayDoh animals. Neighbors paid ten cents admission, and our hands were full of dimes at day’s end. World-class mimicking of neighborhood characters kept us laughing then and now.

“And then let it go, Suzette,” said Muggins, after I told them what was bugging me. (Her real name is Vivian, but I didn’t know that until I was nearly ten.)

And let go I did, but strangely, not because of inner discipline or my will to erase negativity.  Rather, it was their steadying presence, protection, and certainty that things will work out.

Fun took center stage.  Alice taught us how to make homemade tortillas.  We swam in the ocean.  We sweated in a sauna of an event tent to listen to Boston comedians. My daughter and granddaughters marveled at childhood stories they hadn’t heard before.

We lazed aboard The Liberte as the schooner glided eastward on Cape Cod waters. My mother used to say, “Be patient and wait for the Lord.”  Good friends enhance my patience. Like puppies, we happily squashed together on a long cushion under the mast. For once, we had a reprieve from “what’s in front of us.” Overhead, the main sail cut a giant, white triangle against a blue, blue sky.

My head rested on Curly’s shoulder, and Muggins said, “We’re so lucky to do this together.” All of us looked up with gratitude. 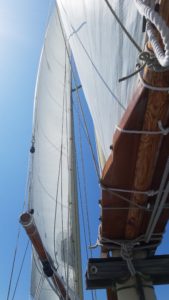 This column ran through GateHouse Media on 8/1/2019 and in The Patriot Ledger.