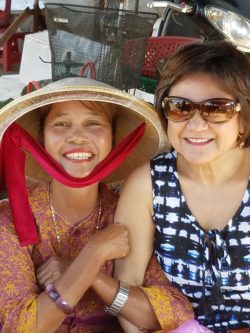 I am in Vietnam where Americans are warmly welcomed.  Odd.  I’m 62 and I recall TV images of brutal jungle warfare. From 1964 to 1973 about 2 million tons of American bombs were dropped. As a teenager, I learned about napalm and Agent Orange.  Most of all, I remember the anti-war protests.  Apparently, so do the Vietnamese, and it has gone a long way toward healing.

I traveled from Hanoi to Danang to Ho Chi Minh City (It’s still “Saigon” to locals) where Americans are regarded well.  Puzzling. Is it because a younger Vietnamese generation has forgotten?  In Hanoi, a 32-year-old tells me her grandparents spent years in a “re-education camp” after Americans left.  Near Danang, another knows a third generation child who is deformed from Agent Orange.  In Saigon, an older man nurses his father, long disabled from torture. The war is not irrelevant.

Sixty percent of Vietnamese practice Buddhism. Does it play a part in how the Vietnamese can welcome Americans given our role in the Vietnam war? One woman did say, “We are taught to move on.”

But there was a different, more common answer, and an older woman said it best, “It was not you.  It was your government.  It was our government. But we saw so many Americans going to jail because they protested. They suffered for us.”

In my teenage years, the U.S. divide between anti-communist “hawks” and anti-war “doves” was violent and bitter. Millions of then-young Americans demonstrated, burned draft cards, were beaten, jailed, and sometimes shot for defying an unjust war.  They are the reason many Vietnamese can let go of the past. Yes, they suffered at the hands of our government, but they knew American anti-war protest was strong against the war.

Today, new trees cast shade at historic Cu Chi village defoliated by napalm. There, tourists visit underground tunnels that once stretched for 130 miles used by the Viet Cong, as well as farmers and villagers to escape U.S. bombings.  About 43 miles away, Ho Chi Minh City is modern with wide boulevards and parks, but its War Remnants Museum is a hard place to visit. An exhibit by wartime photojournalists is gruesome. Children lying dead with their mothers. Napalm strafing. American GI’s wounded. The present effects of Agent Orange on third generation children.

Yet through darkness, beams of humanity endure.

Below two photos of American soldiers is a caption:  Hugh Thompson and Lawrence Colburn, who were two U.S. Army Helicopter pilots, saved the lives of at least 10 Vietnamese civilians during the unlawful massacre of noncombatants by American forces at My Lai, Quang Ngai province on March 16, 1968.

Men with a conscience.  Vietnam remembers the anti-war protests, the rescue evacuation of Vietnamese during the fall of Saigon, and the lifting of the trade embargo in 1994 by President Clinton. Doing the right thing reverberates through generations. Because of this, they see us as a good and decent people. Thus, a warm welcome to Americans in Vietnam is not odd at all.

This column ran in The Patriot Ledger on February 18, 2017 and nationally through GateHouse Media.