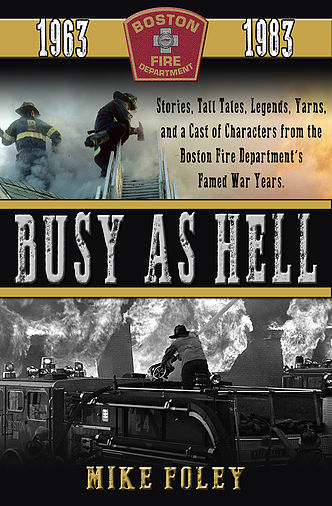 When Mike Foley was a child and lost something, his mother would say, “It’s just stuff.”  However, when he lost a marriage, a job, and three generations’ worth of family heirlooms, it’s not easy.  Yet at age 69, the former lieutenant with the Boston Fire Department is not bitter. “I’m not in charge, I leave it to God,” said Foley, a Catholic and resident in Rockland.

Foley’s stripped-down life gave him the time and space to write about The Boston Fire Department in his new book is Busy as Hell: Stories, Tall Tales, Legends, Yarns and a Cast of Characters from Boston Fire Department’s Famed War Years.”  During 1963 through 1983 the greatest number of fires occurred in Boston. Its men fought fires, on average, every 13 hours, with no computers or high-tech safety gear back then. Firefighters wore dungaree coats and optional safety gloves.

Busy as Hell captures the fire department’s camaraderie, pranks, and heroics, a book that never would have been written had Foley not lost everything first. But what a journey to realize his purpose.

Foley is a third-generation Boston firefighter, and for 25 years, thrilled to the combat of fighting fires and saving lives. To lose his job through a disability in 1994 broke his heart. Whenever fire houses closed, he collected items, such as a large brass fire bell and a roll top desk, tangible pieces of his days of fraternity.

Then in 2002 after a divorce, he pared down his lifestyle and put everything into a storage unit in Norwood, including family heirlooms, antiques and his firefighting memorabilia.  One day his storage unit was auctioned off through a clerical error. Unit numbers had been transposed, and his possessions worth more than $150,000 had been sold for $150 by mistake.

Foley offered the new owner $5,000 to get everything back, but wasn’t even granted his family albums or personal mementos.  “The stuff is worth way more than that,” said the owner, ironically, a firefighter in Rhode Island.

Robert Foley, a Marine, died in Vietnam and his purple heart was posted on eBay.  Foley asked for its return, “My brother gave his life for that medal.”  In the end Foley had to pay $800 as the top bidder to get it back.

Painful. Frustrating.  Unfair.  Yet Foley believes God has a greater purpose.  It is Foley’s part to forgive and move on. His mother’s mantra played in his head, “Mike, it’s just stuff.”

Years later, Foley finds meaning behind his experiences. One is greater compassion.  “Suddenly, I’m like fire victims.  I’ve always been on the other side, putting fires out, but now I know what it feels like to lose everything you have.”

Second, losing his beloved job with the Boston Fire Department led to an even greater passion: writing.  His new book sold 500 copies just on his website, BFDbusyashell.com, and Foley has two other Boston Fire Department books planned.  Negatives became positives because anger and regret never owned his heart . Self-revelation follows peaceful surrender.  “People ask me all the time, ‘why aren’t you mad?’  Why would I be? I’m not in charge,” and Foley points upward.

This column ran in The Patriot Ledger and through GateHouse Media, 3/29/2016