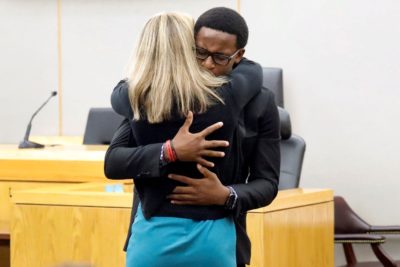 Extreme forgiveness brings harsh criticism in the face of rulings, verdicts and sentences that appear unfair. For loss of life, the right punishment or exact recompense is never reached.  Therefore, how is forgiveness even possible?

Texas police officer Amber Guyger entered an apartment she mistook for her own, and shot and killed Botham Jean who lived there. Guyger was found guilty of murder and Brandt Jean, the deceased’s younger brother forgave her in court, and their embrace swept the news world.  So was such extreme forgiveness exemplary or insane?

Apparently, Brant Jean’s Christianity fueled his actions when he said to Guyger, “I think giving your life to Christ would be the best thing that Botham would want for you.”

Public censure mounts against his forgiveness. His brother was shot dead while sitting in his own home.  Why should Amber Guyger, a white policewoman, be forgiven in a clear cut case of killing yet another unarmed African-American man?  Now that Joshua Brown, the key witness against Guyger, was mysteriously murdered days after his testimony, is forgiveness worthless in a world bent on hate and vengeance?

If someone I loved were senselessly killed, could I overcome my own rage and despair to bestow forgiveness? Doubtful. A long shot. That’s a lot of pain to process.

What in Christianity could possibly give anyone that power to forgive?

Here’s where that superhuman ability may rise from:  the belief that God is the perfect judge, and that perfect judgment comes from God alone.  And it will come.  It is faith in an ultimate, divine power who decrees justice will triumph, and thus, can make forgiveness possible, against all odds and reason.  A giving of grace that is so superhuman that most believe it is not genuine nor possible.  And who could blame the skeptics?

Yet, if one believes divine justice exists, then forgiveness can, too. Recently, the biblical passage, Hebrews 4:12-13, made me realize what an awful burden is lifted.  No matter what a court rules, perfect justice will prevail in time.

“For the word of God is alive and active. Sharper than any double-edged sword, it penetrates even to dividing soul and spirit, joints and marrow; it judges the thoughts and attitudes of the heart. Nothing in all creation is hidden from God’s sight. Everything is uncovered and laid bare before the eyes of him to whom we must give account.”

It means that everyone is held accountable, and the discernment of God is precise and penetrating in all aspects.  It means no one gets away with anything. It means all aspects – background, transformative moments, secrets, mitigating circumstances – are known and taken into full account.

Justice will triumph and be meted out in perfect form, perhaps not on my timetable or in the way of my personal imaginings,  but judgment will come and in ways for the greatest good that I am unable to envision.  Maybe that is the mindset that leads to forgiveness in the extreme.

This column ran in through GateHouse Media on 10/7/2019 and in The Patriot Ledger.