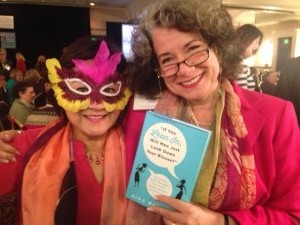 Follow Me
Latest posts by Suzette Standring (see all)
[Photo: At EBWW conference, Suzette with Gina Barreca, author and professor of English and Feminist Theory at the University of Connecticut.  Suzette is wearing the “tribal mask” for loud, smart, funny women.  Thanks for the gift, Gina!)

A smart, competent female writer stood up to share her thoughts.  “I’m sorry to take up the time…I’m probably wrong, but…”  Many repeated variations of this phrase. It’s a quiver of arrows we aim at ourselves.  Ladies, can we stop apologizing for and over-explaining our work?

As nurturers we crave rapport, and pooh-poohing ourselves is a form of bonding. At best our intent is humility or self-effacement, but it conveys, “Forgive me for having thoughts.”

Yet for three days the automatic apologies and the self-put-downs became acceptable background chatter.  Instead of the white noise of surf, it was a mumble of mea culpas.

I’ve been guilty, too.  For years, I could not simply say, “Why, thank you.”  No. My standard reply was “Oh, if I can do it, a chimp can do it.” It was a man who said, “Knock it off. It raises questions for anyone who wants to work with you.”

Also, the kissing cousin to the “apology” is the long wind-up pitch. You know, giving a pre-explanation for the explanation about work. Example:  “What’s your blog about?”  “Well, back when I was ten…”

I suspect the long wind-up pitch is born from a desire to be understood fully. Never will that be. The Omnipotent Oz is an illusion.  A one-sentence description, carefully crafted, is plenty because your work will speak for you.

It took me years to undo these bad habits.  My ex-husband, a trial lawyer, served as Professor Higgins to my Eliza Doolittle.

My apology was my typical opener, “Is this a good time?  I know you’re tired. It’s no big deal.

Then came my long wind-up pitch.

Me: You remember I told you blah-blah-blah that happened a few years ago, and remember how lately I was thinking yak-yak-yak….”

Me: “I crashed the car but nobody was hurt.”

How freeing to reclaim 20 minutes of my life! No extra toppings. The cheese stands alone. Over time it became my model for communication.

It’s powerful to get to the point. I saw this during “Speed Dating for Writers” at the EBWW conference.  Each attendee had five minutes to get advice from an expert, such as literary agents, self-publishing, memoir, and more. I offered tips about syndication.

Without the conversation tags, we were so productive, talking as fast as Texas auctioneers.

Be mindful of how your opening comments reflect on you. Nix the phrases that equal “It’s not worth it to listen to me.”  Own the mindset, “I have something to say that could help you, too.”

Lulu, my 8-year old granddaughter, told me, “Say it with sass with a snap on top!” 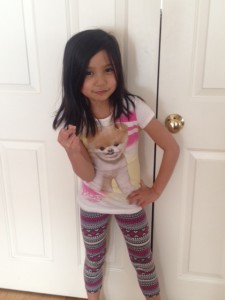 Lulu snaps to show how