A Visit To Mother Mary’s House 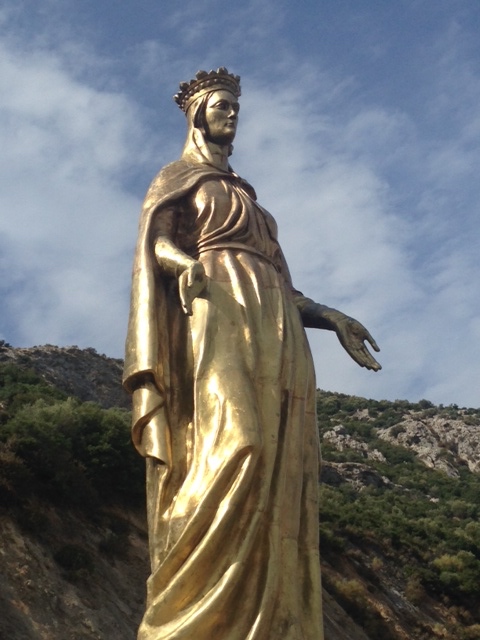 Mary, Jesus’s mother, spent her last days in Turkey, and I visited her house, surrounded by maple trees, high above the ancient Roman ruins of Ephesus, five miles from the Aegean Sea, now rebuilt by the Catholic Church as a holy place.

After Jesus entrusted his mother and apostle John into each other’s care, it is believed they sailed from Jerusalem to John’s home in southwestern Turkey. Later, when John was exiled to Patmos, early Christians feared for Mary’s safety and it was said she lived hidden in the hills, the location a mystery for centuries until it was revealed in a vision.  As we stood before Mary’s house, my husband David read the story of its discovery, speechless.

In 1819 through ecstatic visions, Anna Catherine Emmerich, a Catholic nun and mystic in Germany who bore the stigmata, described Mary’s life, which included descriptions of a two-room stone cottage and specifics of its surroundings.  Bedridden and untraveled, Emmerich had her visions recorded by Clemens Brentano who wrote The Life of the Blessed Virgin Mary from the Visions of Anna Catherine Emmerich, published in 1852. 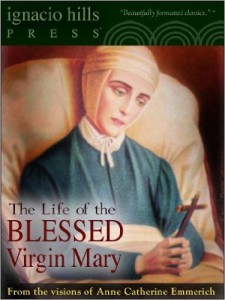 The book of her visions

In 1891, two scientific expeditions set out to discover Mary’s house based on the book. Excavations revealed a two-story stone cottage dating back to the first century.

During high season, 10,000 visitors pass daily through the tiny chapel. Arriving early, we spent a rare ten minutes alone before a simple altar and bronze statue.

In the candlelight, I closed my eyes to get a “feel” for the place. Suddenly, I was enveloped in a flood of magnificent, maternal energy. Like a child reunited, tears streamed down my face. My crying was unexpected, but neither sobbing nor sad, rather a deep, physical letting go. The energy around me felt bathed in light and understanding as a particular prayer poured out of me to Mary – mother to mother – about what else?  Family and kids. As we left Mary’s house, a strange relief at being heard, listened to, and loved overwhelmed me.

Outside, we lit candles in glass boxes on wrought iron stands. 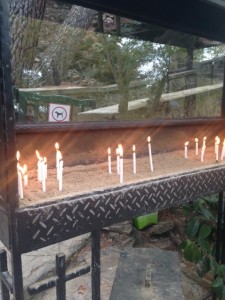 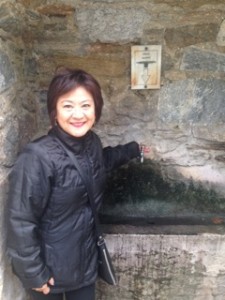 Suzette with hand on faucet, one of four on a stone wall for fresh stream water near Mary’s House

Further down the paved path, a gigantic blanket appeared mounted on a stone wall, its surface a homespun jumble of fuzzy, ruffly textures. 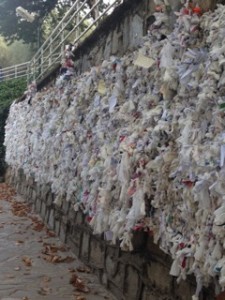 Looking closer, pieces of paper had been stuck into wire netting over time; millions of petitions, some colored, many ribboned, a few sealed with red wax. One addition was a small, but very thick, journal. Our notes were added to a vast body of entreaties, requests, complaints, fears and hopes, every prayer made on the belief that maternal love never turns away. 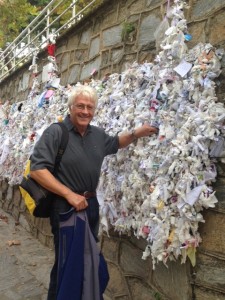 Afterwards, I turned to my scientist husband, who looked a bit shaken, and asked, “Did you feel that, too?”  Looking into my tear streaked face, he said, “No, not like you, but I still can’t get over how they found this house.”