Healing the unsaid with the dead 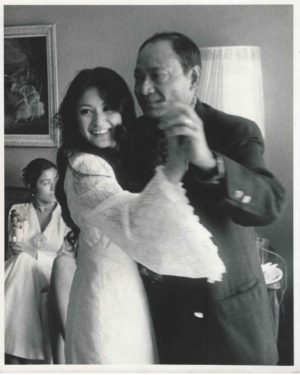 Lately memories of loved ones, now gone, are tinged with “I wish I told them [fill in the blank].”  Recently, I had the chance. A meditative exercise is designed to heal the unsaid with direct conversation. I tried it with my father who died in 1982.  Afterwards, there was cleansing and completion.

Etheric Plane Communication (EPC) is an emotional clearing technique taught by David Quigley, founder in 1984 of the Alchemy Institute of Hypnosis in California. His methods center on Inner Child rescue and healing.  In Boston, Quigley gave me the chance to tie up loose ends with my dad.

What loose ends?  As a child, I felt emotionally neglected by my father, which set up negative patterns in my life. However, with maturity, I now understand his emotional limitations.  I also see how my father eclipsed his own wants to care for us. Now I yearned to tell him that.

Anyone can do this EPC exercise. Although being guided was helpful, it’s a conversation one can do alone. Communication is premised on the idea that spoken words, much like a prayer, are powerful and connect us spiritually through time and space.

In a private place, breathe deeply, and relax.  Imagine your loved one in front of you, and speak out loud from your heart.  Don’t censor yourself. Say what comes to mind. Feel what you feel.

In my case, I imagined my dad at the age of 72 when he passed away.  I told him he rarely talked to me or showed affection and his emotional withdrawal hurt.  I told him my mother especially suffered a great loneliness.

Quigley, who guided me through the exercise, said, “Become your dad. What is he feeling?”

I sensed sorrow and confusion, that my father wanted to be different but didn’t know how. I imagined him boxed in by darkness.

I continued, “Dad, I’m not going to badmouth you anymore. You did a lot of good things.”

Then I listed them: a good provider despite respiratory problems like asthma and bouts of bronchitis.  He taught me to be resourceful and dependable.  Despite economic hardship, he sent us to parochial schools and we benefited from a solid education. I imagined a heavenly light beaming down on him as a blessing and I said,  “All three of us turned out well, and you had everything to do with that. I love you, daddy.”

In my mind I saw my father sobbing with relief. The ceiling over him lifted and the skies showered him with light. Unexpectedly, he was transformed from an elderly man back to his youth when he was an active serviceman in the U.S. Navy, his happiest days, when he was young, adventurous and full of hope.  Our talk in spirit was liberating.  In releasing him with love, I was the one set free.

Now some may say, “All you did was talk out loud. He wasn’t there. That wasn’t real.”

If the healing does feel real, does it matter?   Try it.

This column ran in the Patriot Ledger (11/28/2016) and nationally through GateHouse Media.