Healing Veterans in Nature: House in the Woods 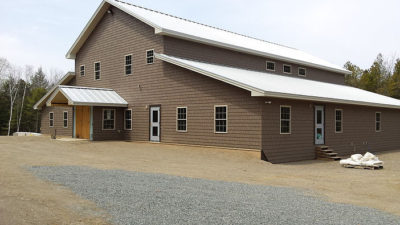 [Photo from http://houseinthewoods.org – House In the Woods in Lee, Maine]

All veterans were prepared for the ultimate sacrifice. They grieve for comrades lost, and too often, endure lifelong hauntings through PTSD. They endure disabilities and emotional scars. For all veterans, Paul and Dee House, along with Bill and Quie Emery, created a refuge amidst the healing power of nature in Lee, Maine called “House in the Woods Military and Family Retreat.”

Later the Houses attended the military memorial service at Fort Hood, TX for 19 soldiers who died the same month as Joel House. Grieving with other Gold Star families was a palpable comfort.  Army buddies of their son traveled to Maine, and under a star-laden sky at Silver Lake while roasting marshmallows, stories were shared about Joel.  The bonds of sorrow, guilt and pain made them “family.”

Likewise, emotional support from Gold Star families sustained the Emerys.  Both couples discovered that the long road to healing is best shared with others who carry the same sorrows.

What if spiritual mending could be created for others in a natural setting?

Plans began in 2010, and today, “The House in The Woods” (www.houseinthewoods.org) is a therapeutic and recreational retreat for members of U.S. Armed Forces and their families in Lee, Maine. The multi-level, 7,200 square foot lodge located on four acres can accommodate up to 24 people at no charge.  The House is non-profit and relies on private contributions. In Northern Maine’s wilderness, veterans can canoe, kayak, hunt, fish, hike, and camp together. Paul House and Bill Emery serve as wilderness and hunting guides.

The House is an alcohol-free refuge for vets and their families to connect and heal.  Often a soldier’s soul and psyche are damaged.  Upon return from war zones, vets can feel alienated from society, unable to resume pre-military, normal lives. The House in the Woods looks like a sporting club, but all activities are planned with care to help ex-servicemen and women regain trust, a sense of emotional and physical safety, and to overcome isolation by pushing them out of their comfort zones, using the cohesion and team spirit that vets remember from their days of service.  The goal is to help them feel alive once again and to connect them back to society.

At the House, all veterans are welcome, whether service ended 60 years ago or six days ago. One’s spirit is restored amidst wilderness solace and splendor. House said, “As healing begins, God speaks through nature’s ageless wisdom.”

This column ran through GateHouse Media (11/7/2016) and in The Patriot Ledger.