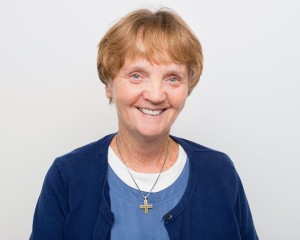 Sister Peggy Cummins, age 67, runs a safe house for survivors of sex trafficking.  Honoring her vow to chastity for 48 years, she had no experience with either sex or trafficking when she began this work in 2011.  Yet the horror and debasement did not shock her. Instead she was jolted by a different realization.

“They are normal, beautiful women. God has made us so much alike.  I look at them and say that could have been me,” said Sister Peggy with the Sisters of Notre Dame.

Bakhita House originally opened in Quincy but now operates north of Boston.  It’s namesake, St. Josephine Bakhita, kidnapped from the Sudan and enslaved in Italy, is the patron saint of trafficking victims.  When Sister Peggy and others learned that once such women escape or are rescued, they have nowhere to go, the idea for a safe house was born.

“We form communities all the time. How about one for these girls? So we got a house and formed a task force. We accommodate only three. We keep it small, like a family, like a home, not like a traditional shelter.”

Linda’s mother was an addict whose boyfriend sexually abused Linda. Later in a foster home, Linda was beaten and became a constant runaway. A stranger took her under his wing offering help and protection. Soon the older man was having sex with the teenager. One day the rent was due and he forced Linda into prostitution.

Sister Peggy said, “Everything changed. He’d bring her to a house or use the inside of his car for her to have sex with all kinds of guys. She ran away, but he found and beat her. She went to her mother’s house where she was raped and treated for injuries. With help from My Life My Choice (an agency fighting against the exploitation of children), she ended up at our house.”

Trafficked women share similar stories. They need medical care, counseling, and schooling.  Some have lost custody of their children, and at Bakhita House, 95% are from the Boston area. They arrive, wary and ashamed. Along with practical help, something rare is offered: faith in them and God’s love.

“I tell them, ‘You won’t be disappointing us. You are already loved.’ We don’t give up on them or judge them. The bottom line is this is God’s work,” said Sister Peggy.

Bakhita House accepts only private contributions. The four nuns (three from the Sisters of Notre Dame and one from the Daughters of Charity) take no salary and are assisted by volunteers. There are many successes.

An African woman, forced into domestic servitude, escaped to Bakhita House.  Later she attained her GED, trained in hotel hospitality, and now works as a concierge at a Marriott. Later she reunited with her two children from Zimbabwe.

One belief holds true for every woman experiencing the most terrible ordeals. “She is more than what happened to her,” said Sister Peggy.

My Life My Choice (an agency that rehabilitates  children exploited in sex trafficking (ages 12-17)
http://www.fightingexploitation.org